From Old School RuneScape Wiki
(Redirected from Runecrafting)
Jump to navigation Jump to search
The RuneScape Wiki also has an article on: rsw:Runecrafting
For a list of all requirements and unlockables within the Runecraft skill, see Runecraft/Level up table.
The official world for Zeah Runecrafting is world 513 (UK) (P2P).

Runecraft, often called Runecrafting, is a skill that allows players to craft their own runes for Magic spells. The experience earned from making runes is small, and due to the need for constant running and banking, it is fairly click and attention intensive. However, due to the constant demand for different types of runes, it can create a very generous profit despite its slow experience rates.

Due to how slow Runecraft is to train, many players look to avoid training Runecraft, and use the experience from lamps, books of knowledge, and from playing Tears of Guthix to raise the stat without having to train it.

In the Runecraft skill, magical runes are crafted by binding the magical energy from runic altars into magical stones. These stones are called essence. There are various types of essence, with each of these types being able to be crafted in a selection of runes.

Rune essence can be acquired by mining and from monster drops.

Rune Mysteries quest. After completing this quest, a selection of wizards can teleport the player to the rune essence mine, where the player can mine the Rune Essence to obtain rune essence for the Runecraft skill.

Rune essence can be obtained by mining by free-to-play players and by members that have a Mining level lower than 30.

Pure essence can be acquired by mining and from monster drops.

Rune Mysteries quest. After completing this quest, a selection of wizards can teleport the player to the rune essence mine, where the player can mine the Rune Essence to obtain pure essence for the Runecraft skill.

Pure essence can be obtained by mining only by members that are level 30 or higher in the Mining skill. However, free-to-play players can obtain via trading with other players.

Pure essence can be also be obtained quickly by members by playing the Temple Trekking minigame.

Daeyalt essence can be used instead of pure essence, to craft air, mind, water, earth, fire, and body runes as well as cosmic, chaos, astral, nature, law, death, blood, and wrath runes. Doing so grants a 50% bonus in experience gained from creating these runes. This effect also applies to runes crafted at the ZMI.

Daeyalt essence can be acquired from the Daeyalt essence mine in Darkmeyer. Shards can be converted to daeyalt essence by trading Noranna Tytanin located near the entrance of the mine at a 1:1 ratio. Any essence received is sent to the bank.

To trade in the shards for daeyalt essence, a version of the vyre noble disguise needs to be worn.

Access to Darkmeyer and the essence mine requires completion of Sins of the Father.

Dark essence fragments can be used to craft blood and soul runes.

38 or higher. The ability to use the dark essence fragments to craft runes requires

Blood essence cannot be used to craft runes; instead, it offers the chance to craft an extra blood rune per pure essence, daeyalt essence or dark essence fragment when activated.

Blood essence is an uncommon drop from Nex. It can also be obtained as a rare drop from certain monsters in the Ancient Prison, and may be found inside the Intricate pouch reward from the Guardians of the Rift minigame.

Talismans are quite important in the runecrafting skill, as they are the keys used to access most altars. Each one is magically attuned to the Runic altar that shares its name. An air talisman, for example, is attuned to the Air Altar. A player may use the talisman only on its corresponding 'mysterious ruin', to repeatedly reach the altar inside. Talismans can be acquired from drops or by trading with other players.

A talisman can be fused with a tiara. This creates an equipable item that lets you left-click on the corresponding mysterious ruins to enter, and saves an inventory space. The elemental and catalytic talismans are instead combined with a Gold tiara.

Runic altars are locations at which players can use the Runecraft skill to turn essence into runes. Each altar corresponds to a different type of rune. 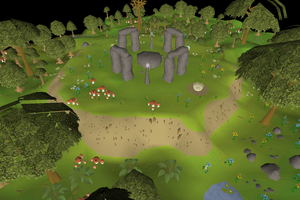 Inside the Nature Altar.

Mysterious Ruins are not labelled on the world map. Players can discover the ruins' location by clicking 'locate' on a talisman. A talisman, tiara, or runecraft cape is required to actually enter the ruins and use the altars.

The blood and Soul Altar can be found in Arceuus, near the dense essence mine. No talisman or tiara is needed to use these altars as they are in the regular dimension.

The Ourania Altar, also known as the ZMI Altar, converts pure essence into an assortment of random runes, with a chance of bonus runes being created if players have the medium Ardougne Diary completed. The altar, which requires no talisman or tiara to enter, gives roughly 1.7 times the normal experience for each pure essence used. Rune essence cannot be used. Players do not need a specific Runecraft level in order to craft at this altar, but the chance of crafting higher-levelled runes increases with a higher Runecraft level. Players can not craft a wrath rune through the Ourania Altar; this is the only rune uncraftable at the Altar outside of combination runes.

The Abyss is a special region that requires completion of the Enter the Abyss miniquest. The Abyss provides access to all the runic altars without the need for a talisman, with the exception of astral runes and wrath runes. The Abyss consists of two rings: a dangerous outer ring in a multiway combat zone and a safe inner ring with rifts leading to the runic altars. In appearance, it seems to be oddly organic, with eyes, boils, and strange-looking tendrils. Aside from the abyssal monsters inhabiting it, using the Abyss is also dangerous because players who enter the Abyss will have their Prayer points drained to 0, and players who enter without wearing an Abyssal bracelet will also be immediately given a skull.

As a player's Runecraft level increases, they can make more runes. However, they only earn experience based on the amount of essence they use. The number of runes made from the essence in a player's inventory in an action that gains a level is determined by the player's level before the runecrafting action, even if crafting the same amount of essence one piece at a time would yield more runes. For example, a player with a Runecraft level of 22 will craft 3 air runes to 1 pure essence.

The Raiments of the Eye, obtainable from playing Guardians of the Rift, grant 10% more runes when Runecrafting per piece, with a 20% set bonus for a total of 60% when the full outfit is worn.

5x earth runes can only be achieved with a skill level of 99 with a +5 boost from an evil stew and is the only rune that has a reachable multiple requirement that is past a skill level of 99, with fire runes being just shy of being an accessible 2nd; others are possible but are not accessible with the current existing boosts. It is currently unknown if cosmic and later runes have any multiplier for 3x or higher.

Note: Death & Law Runes are the only runes that can yield multiple runes that do not follow the normal levelling conventions.

Members have an extension to Runecraft, which is the ability to combine two runes into one item.

The player may use the Lunar spell Magic Imbue to make combination runes without needing the opposing talisman. Using binding necklaces and Magic Imbue to craft lava runes can yield the highest Runecraft experience per hour in Old School RuneScape.

Essence pouches are bags that can hold varying amounts of rune, pure or daeyalt essence for use in the Runecraft skill. Essence pouches are highly prized among runecrafters because they can be used to take larger loads when runecrafting and mining pure essence.

Essence pouches decay with use, and must be repaired by visiting the Dark mage in the centre of the Abyss (or by contacting him with the NPC Contact Lunar spell) or they will disappear. Note: The pouches do not have to be brought directly to the Dark Mage in order to be repaired; any and all pouches that are stored in the bank will also be repaired.

Essence pouches are dropped by monsters in the Abyss and the Abyssal Area after completion of the Enter the Abyss miniquest.

This process requires level 60 or higher in the Runecraft and Magic skill and grants 200 experience in both skills.

The Rift guardian is a skilling pet that can be obtained while training Runecraft. The chances of getting it are dependent on the player's Runecraft level, the rune the player is crafting, and the number of essence used.

Temporary boosts do not allow players to use higher tier essence pouches.

Upon completing any of the following quests, players may choose to allocate experience to Runecraft. These rewards usually come in the form of items, such as lamps or books, and are independent of any experience rewards directly received for completing the quest.