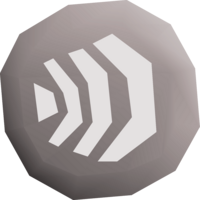 Runes can either be bought from the various Magic shops found throughout Old School RuneScape, created from rune essence through the Runecraft skill, procured from drops by killing monsters, or picked up from various spawns on the ground.

All players can use the runes listed below, though free players can only craft runes up to body runes (using the Runecraft skill). The two free-to-play Magic stores (in Varrock and Port Sarim) only sell the basic elemental runes, chaos runes, and death runes.

The Wizards' Guild located in Yanille has the cheapest Magic shops available to members. Located on its upper floors, it sells every rune except astral, cosmic, wrath, and combination runes.

Only members can use the runes listed below.

These runes are members only, and act as one of each of their composite runes.

Many monsters drop runes in RuneScape, but some more than others. These are some of the most notable and easy.

Runecraft is the skill of crafting runes from rune essence. Through this skill, players can create their own runes for use in Magic.

Runes can be obtained by completing Ali Morrisane's Rogue Trader minigame, which players may complete after finishing The Feud quest. After completing the minigame, players are able to obtain runes for a cheaper price. Unlike most shops, prices here stay the same while you are buying or selling runes.

There are several Magic shops around RuneScape that sell runes. These are identified with the flame icon

on the map. Shop names in italics are members-only. Note wrath runes can not be bought from shops anywhere.

The Barrows minigame provides large amounts of catalytic runes (mind, chaos, death, and blood) from the chest, though very high combat skills are required in order to be successful at the Barrows.