Runite rocks are the second-highest level rock in Old School RuneScape, bested by amethyst crystals, requiring 85 Mining to mine. When successfully mined, the player receives a runite ore and 125 Mining experience. After being mined, runite rocks usually take around 12 minutes to respawn. They are highly popular and often are depleted of their resources, which prompts players to switch worlds to find rocks that haven't been mined. It is recommended not to hop to busy servers as busy worlds are more likely to have their ores already depleted.

When mining runite, players may find it useful to keep track of the time that they mined the ore as well as the world number. If done accurately, players can hop to other worlds (keeping more such notes along the way) to mine runite while keeping an eye on the time, and then hop back to worlds where they previously mined runite when it is about time for the ore to respawn. This method of collecting runite ore does not need to be used when mining outside of popular member areas, such as the Heroes' Guild mine requiring Heroes' Quest to access said mine, or at secluded areas like the Central Fremennik Isles mine, which requires starting The Fremennik Isles. Moreover, starting Mourning's End Part II and wearing Mourner gear opens up the Mourner Tunnels mine, which is another remote mine for members. 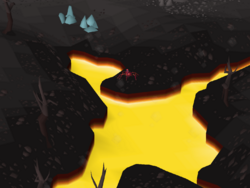 Lava Maze Rune Mine is currently the only place for free-to-play rune miners.

Runite rocks in places like the Central Fremennik Isles mine are rarely targeted by players, and as such, there is little need to worry about the ore being sometimes contested, whereas the popular 46 Wilderness Mine among both free players and members is almost always taken. However, such places in the Wilderness are usually dangerous due to high-level monsters and, more importantly, player killers.