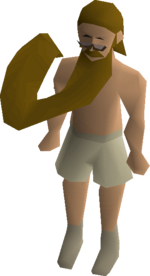 Rupert the Beard is a friendly yet odd dwarf who speaks in a funny way, quite similar to Sir Tiffy Cashien, "that namby pamby nincompoop". When his good friend, Winkin the gnome farmer, was captured by Nora T. Hagg, a notorious witch resident nearby Taverley, he went to rescue him but was captured and held in a tower by Princess Miazrqa of Asgarnia, who received a fake reason for the imprisonment from her second cousin twice removed Nora. While snooping in Nora's house, Rupert found a potion which he put into his helmet, unbeknownst that it was a hair growth potion, which explains the length of his beard. During Grim Tales, a lost pendant is retrieved for the princess, who agrees to free Rupert. His armour has a special compartment to store his facial hair in.

After freeing him, Rupert gives the player his helmet as a reward. If lost, a replacement can be obtained by paying Rupert 60,000 coins.