From Old School RuneScape Wiki
Jump to navigation Jump to search
The RuneScape Wiki also has an article on: rsw:Sailing
This article is about the proposed skill. For the joke added for April Fools 2014, see 2014 April Fools.

Sailing was proposed as a skill to players in August of 2015 in a Dev Blog. The skill was to consist of three main activities: ship building, navigation, and exploration, and was said to be available to free-to-play.[1]

In July 2008, prior to the release of Old School RuneScape, Sailing was speculated to be a new skill to RuneScape due to the spread of faked pictures and evidence of its supposed release. Afterwards, it had become a subject of jokes both by Jagex Moderators, through references and April Fools jokes, and the community. In Old School RuneScape, the 2014 April Fools event centred on Sailing being released as a new skill before it was considered for a potential real skill. 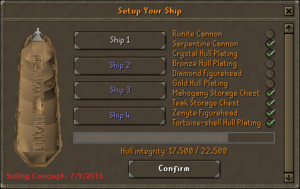 Concept of a possible shipbuilding interface.

The details of the skill were expanded upon further by three development blogs and a trailer in August and September 2015. Examples included creating ships using different logs at various ports such as Port Sarim and Port Khazard, outfitting those ships with cannons of different tiers of metals, using those cannons in player-versus-player combat similar to the Wilderness, and exploring new islands which could only be reached with the Sailing skill.[1]

This proposal was concluded with a poll in which players were asked to vote for or against inclusion of a new Sailing skill. The poll ran from 10 September to 16 September 2015, resulting in a 68% Yes to 32% No vote, failing to reach the 75% required for implementation. 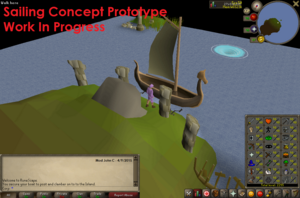 A player on a Sailing island, showing the concept Sailing skill icon.

Following the results of the poll, many of its advertised features, rewards, and locales were added separately in other updates. These include:

The interior wood of your ship/metal

What do they even do?