Saltpetre is a mineral found north-east of the Woodcutting Guild in Hosidius, where five saltpetre deposits can be found (big grey circles on the map). Saltpetre can be obtained by using a spade on these deposits. A bank deposit box can be found in the centre of the saltpetre deposits. Players can teleport here by using the skills necklace and going to the Woodcutting Guild, or using Kharedst's memoirs to teleport to Hosidius, then running south.

Saltpetre can also be obtained as a reward from the Chambers of Xeric and supply crates from subduing the Wintertodt.

Digging up saltpetre is a task in the easy Kourend & Kebos Diary. 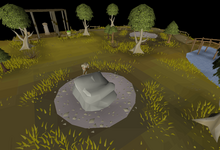 Saltpetre deposits that can be dug to obtain saltpetre are only found at one of the five deposits, which moves when it is depleted. Konoo, a saltpetre digger, will follow the saltpetre around, so it's helpful to look for a yellow dot on the minimap when searching for the new spawn. He provides players with a free spade, should they require one.

When digging saltpetre, players have a chance, roughly equal to their Mining level out of 100, of receiving two at once. Players with a high Mining level (80+) can collect 1600 saltpetre per hour; however, players with level 1 Mining will only be able to get about 800. Other things that may be advantageous when digging saltpetre include a high Agility level, energy potions, and weight-reducing clothing, due to the amount of running around that may need to be done.

Saltpetre is used with regular compost to create Sulphurous fertiliser, which can then be used to gain Hosidius favour by donating it to the clerk south-west of the bank, at a rate of 0.1% favour per bucket. This also grants 2 Farming experience per bucket of fertiliser made.

Saltpetre is also an ingredient in making dynamite for Blast Mining, in addition to being used to fertilise vine patches in the Vinery.

Saltpetre can be used, along with a gardening trowel, to treat the soil in the Vinery.