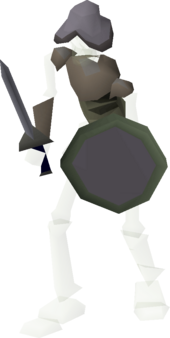 San Tojalon is one of the long-dead warriors the player must defeat to collect the heart piece for the Legends' Quest. He attacks with melee and can only be killed once, twice if players chose the "short" route in the quest. Killing San Tojalon causes him and his duplicates to stop being hostile.

There are several San Tojalons in the Kharazi Dungeon. If players want to conserve food for the fight with the demon later, they should use Protect from Melee since the demon will drain the player's Prayer at the beginning of the battle anyway.

San Tojalon: Is thee ready to have thy mettle tested?
San Tojalon: Prepare yourself...
Chatbox: San Tojalon will test your mettle.

After killing him:
San Tojalon: You have proved yourself of the honour.

If you try to talk to him after he is defeated:
San Tojalon: Thee has beaten me in battle and still thee searches for source?