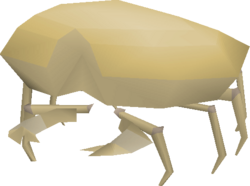 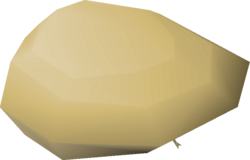 Sand Crabs are aggressive monsters that look like harmless sandy rocks while disguised, but attack when walked by. They are found along the southern coast in Hosidius, Crabclaw Caves, Crabclaw Isle and Isle of Souls. No favour is required to access or kill them and are available to all players. The dwarf multicannon cannot be used against Sand Crabs. Killing a Sand Crab is a task in the Easy Kourend & Kebos Diary.

Sand Crabs are in a remote area and there is no fast way to access them. If you have not been to Great Kourend before, you will only be able to use method #1. It is advised to bring weight-reducing gear and dump any heavy items that bring your weight above 0.0 kg (lower actually doesn't make a difference in your run drain rate), as there is a bank chest in the centre of the beach. There are several ways to get to them. If you haven't been there before, use the world map as you go along to avoid getting lost:

Sand Crabs effectively serve as an alternative to Rock Crabs and enable AFK training due to their clusters in some spots, with little attention needed to train on them. Sand Crabs have 10 more Hitpoints than Rock Crabs and are otherwise identical in stats and behaviour, with clusters of multiple Sand Crabs next to each other in some spots, numbering 4 or more surrounding several spots on Crabclaw Isle. Players wishing to train on Crabclaw Isle must bring 10,000 coins and may also find these spots to be occupied. Sand Crabs will become unaggressive if the player has not left the surrounding area in 10 minutes. To make the crabs aggressive again, exit the surrounding area - roughly the same distance as the diameter of the minimap - and enter again. As they are "dormant" (and cannot be seen on the minimap) until "awoken" by a passing player, Sand Crabs cannot be attacked until they are made aggressive once more.

Ammonite Crabs have likewise mostly replaced Sand Crabs. Ammonite Crabs have 100 Hitpoints and level 1 in all other stats, like the other crabs, but have slightly different mechanics; they are spaced far apart, but also have a greater range of aggression. However, there are more available spots to attack Sand Crabs.

Because of Sand Crabs near-nonexistent offensive and defensive stats, they are an effective training location for low-levelled characters.

There is an altar somewhat nearby the Sand Crabs, so it may be advisable to recharge Prayer at this altar whenever resetting their aggression. Players planning to do so would do well to bring equipment with good Prayer bonuses. Additionally, for non-ironmen players, 55 Prayer unlocks Preserve and allows potions to last longer while training AFK.

The new larger sand crab counterpart, King Sand Crabs are located in the Catacombs of Kourend. King Sand Crabs only share similarities in name, appearance, and in being dormant until walked near; they are powerful in offensive and defensive stats.

Drop rates estimated based on 2,239,707 kills from the Drop Rate Project, unless otherwise cited.

The drops below are only available during the Twisted League.