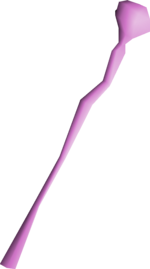 The Sanguinesti staff is a staff requiring 75 Magic to wield. It is only available from the supplies table in an unrestricted world as a test weapon for players. As it was a test weapon, the graphics were used as a placeholder, using a pink staff of the dead.

It is identical in stats and damage to the trident of the swamp, with the added effect that it has a 1/6 chance to heal players for 50% of the damage dealt when attacking an NPC. It is charged with blood runes, and uses 3 runes per cast.