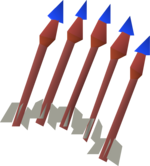 If the player has completed the Hard Kandarin Diary, there is a 10% increase of the likelihood that the special effect of an enchanted bolt will occur (a total chance of 5.5%). This effect is always active regardless of whether or not the headgear is equipped.