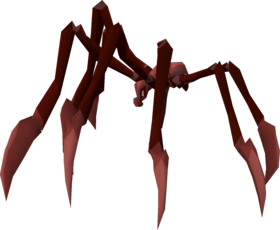 Sarachnis, the mother of the temple spiders, is a mid-level boss found in the Forthos Dungeon, in a former burial tomb south of the Spider Den. She can be killed as part of a spider Slayer task.

Players will need a slash weapon or a knife to access the part of the dungeon where Sarachnis is located; run into the south side of the cave to find her lair.

Sarachnis attacks with melee when players are adjacent to her, and Ranged when they are out of melee range; it is advised to pray Protect from Melee or Protect from Missiles accordingly.

She is weak to crush weapons, and has high magic and ranged defence. Therefore, it is recommended to bring high strength bonus equipment and a crush weapon like the elder maul, abyssal bludgeon, or sarachnis cudgel, paired with a defence-reducing special attack such as the dragon warhammer or Bandos godsword. Dragon claws or a crystal halberd are recommended here for their special attacks if the previously mentioned weapons are not available. Using obsidian armour with Tzhaar-ket-em or Verac the Defiled's equipment sets are also viable options. A budget option, especially for mid-level players, is the leaf-bladed battleaxe due to its exceptional crush bonus, as well as a high strength bonus and being able to cut through the web just before her lair. Dragon mace is also a feasible option for lower levelled players, having a convenient prayer bonus and a special attack which can be used to quickly dispose of the minions. Your other gear should include some sort of magic defence bonus. Leaving the lair will result in Sarachnis recovering all her health.

Upon Sarachnis' death, all her spawns will die as well. Sarachnis will then respawn in 10 seconds.

Drop rates estimated based on 33,620 kills from the Drop Rate Project, unless otherwise cited.

There is a 2/100 chance of rolling the rare seed drop table. Three random seeds are dropped at a time. Maple, yew, and papaya tree seeds are separately dropped alone.

There is a 1/100 chance of rolling the gem drop table.