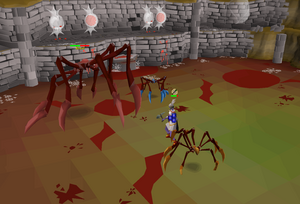 A player fights Sarachnis, the mother of the temple spiders.

Sarachnis has several attacks that she will occasionally use other than the standard melee and ranged attacks. Her melee attacks consist of smashing the player with her legs, while she launches barbed projectiles as her ranged attack.

Sarachnis attacks with melee when players are adjacent to her, and Ranged when they are out of melee range; it is advised to pray Protect from Melee or Protect from Missiles accordingly, as they can hit up to 31 if they aren't protected against, and also heal her if they do manage to hit. Her melee range is deceptively large, so only enter her range when you are prepared to take a melee hit. It is encouraged to utilise Protect from Melee and Protect from Range at all times as her attacks are very accurate.

She is weak to crush weapons, and has high magic and ranged defence. Therefore, it is recommended to bring high strength bonus equipment and a crush weapon that can attack fast (such as an abyssal bludgeon.)

The fight is fairly simple; keep focusing on Sarachnis, and when the minions spawn, kill the mage spawn. The melee spawns may be tanked with sufficiently high defensive bonuses, although they do possess a fairly low aggression range and it's possible to shake them off if they spawn in the corners.

Try to only eat food while bound by the sticky web so you don't waste time doing it when you could be dealing damage instead.

When Sarachnis is killed, any remaining minions will automatically die off with her. She respawns 10 seconds after death, in the centre of the crypt.

Sarachnis is weak to crush and has high magic and ranged defence, therefore melee is the only viable method of killing her. All weapons (except the Scythe of vitur) should be on their crush setting (if available). She only attacks with melee if in range, or ranged if out of melee range. If you are hit off-prayer she will heal 5 for a melee attack, and 10 for a ranged hit, regardless of damage done (does not occur if hit with the "Hiss" ranged attack). Her mage spawn (the blue one) will inflict the most damage, so magic defence is a high priority. After being bound by the "Hiss" attack, Sarachnis will always fire a ranged attack. You should swap to Protect from Range for this then return to Protect from Melee when back in melee range. It is not recommended to kill the minions as the damage received from their attacks should be negligible because of the high mage defence. It is better to focus on Sarachnis, and to only switch prayer when bound by the web.

Dinh's bulwark, in conjunction with high-defence armour, allows players to not only tank a good majority of Sarachnis' attacks, but also allows a decent amount of damage to be dealt due to the bulwark's strength bonus being increased based on the player's average defence bonus.

With this method, players will take somewhat minimal damage and can simply pray Protect from Magic the entire fight. Players should be on the Arceuus spellbook to summon thralls, as well as using Death Charge in conjunction with the bulwark's special attack, which have a good chance of instantly killing spawns of Sarachnis that are in range of the bulwark's special attack.

Depending on agility level, players, prior to a trip, should drink a dose of stamina potion as the weight of this setup (ranging from 69 to 73 kg) will cause players to lose run energy very quickly.