Sarachnis cudgel is a crush weapon dropped by Sarachnis, requiring level 65 Attack to equip. The weapon appears to be made from several of Sarachnis' legs bound together by her webs.

The cudgel has slightly better crush and strength bonuses than Viggora's chainmace and slightly lower bonuses than the Leaf-bladed battleaxe, although with a faster attack speed than the latter. This makes it a good one-handed crush weapon which does not degrade or require a charge. 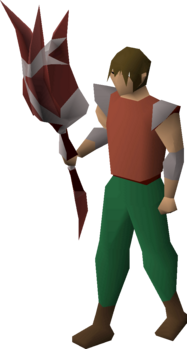