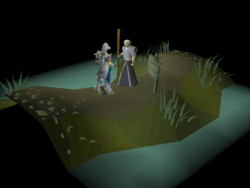 The Temple Trekking minigame, an example of scale theory. Locations depicted in the minigame cannot be visited by the player outside of it, but canonically exist in-universe. This is because Morytania is much larger than it appears to be while playing the game.

Scale theory is a term used by Jagex and players to describe the apparent contradiction between the size of Gielinor in-game and its actual canonical size as confirmed by official lore.

For practical reasons, the size of the game world is considerably smaller than the land depicted is actually supposed to be. A journey that may take the player several hours would actually take an in-universe adventurer several days to complete. Likewise, cities throughout the game are truncated in size, explaining the apparent contradiction between large cities like Varrock and Falador appearing as small towns.

Although initially a fan theory, it has since been confirmed as canonical by the developers.[1]