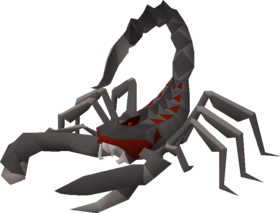 Scorpia is a large female scorpion that resides in a cave beneath the Scorpion Pit. She is a powerful scorpion that can drop one of three shards required to forge odium wards and malediction wards.

For the elite clue scroll from Mandrith, there are a total of 28 scorpions inside the pit.

Once killed, she will respawn in ten seconds.

Scorpia drains 2 prayer points every time she attempts a melee attack. When she reaches 50% health, she will spawn two Scorpia's guardians.