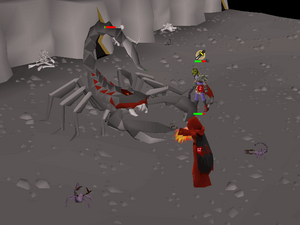 A pair of players battle against Scorpia and her little guardians.

An effective way of killing Scorpia is to utilise her low magic defence by using binding or freeze spells (e.g. Entangle, Ice Blitz, or Ice Barrage) and farcasting her with the Protect from Missiles prayer enabled (since the offspring are aggressive). A good way to do that is by running around the perimeter of the arena, shooting her from corners, somewhat similar to how Commander Zilyana is fought. Using this method, players should avoid getting within range of her melee attacks, which are hard-hitting and fairly accurate.

On the next attack after Scorpia reaches 99 health or lower (even if you splash), she will summon two guardians, which will heal her similarly to the Yt-HurKots from TzTok-Jad, however the guardians will continually heal her rather than attacking the player if they are attacked. The guardians have 70 Hitpoints each and can be killed. It is advised to use Ice Blitz or Ice Barrage on the guardians and lead Scorpia away from them, as they will despawn after not healing Scorpia for 15 seconds. Unlike the healers during the TzTok-Jad fight, these guardians only spawn once; if they manage to heal Scorpia back to full health (and are killed or despawned), they will not reappear when Scorpia falls below half health again.

The setup primarily consists of only taking 3 or 4 expensive items as this boss resides in a multi-combat area in level 50+ Wilderness, meaning player killers may quickly kill off-guard players.

Scorpia is not immune to venom and poison; therefore, using a trident of the swamp or toxic staff of the dead is highly recommended due to its venom capabilities. Due to her low magic defence, a minimally geared player will rarely miss, therefore magic damage and prayer bonus should be prioritised over magic accuracy, to speed up kills and prolong trips limited by prayer. For the same reason, the use of magic boosting items and offensive magic prayers like Mystic Might or Augury are not recommended since they boost magic accuracy, not magic damage.