Scorpion Catcher is a quest in which Thormac, a wizard in the Sorcerer's Tower, has lost three of his scorpions. He tasks you to find them for him.

The location of the Sorcerer's Tower.

To begin, talk to Thormac on the top floor of the Sorcerer's Tower south of Seers' Village. He'll tell you that his rare Kharid Scorpions have escaped and are currently running loose. He'll give you a Scorpion cage to catch the scorpions in and suggest you go talk to the Seers that live just to the north.

Speak to any Seer in Seers' Village before going to Taverley dungeon! Unlike the other two scorpions, you will not be able to access this one unless you have already spoken to the Seer. If you skip this, when you search the wall, you will receive a message and be unable to access the room. The other two may be found without returning to the Seer in between.

The Seer located in Seers' Village will tell you about a secret room with nasty spiders nearby. It would be a good idea to pick up some food, an anti-poison potion, an anti-dragon shield, and the dusty key if you have one. Then, make your way to the Taverley Dungeon any way you want (a games necklace to the Burthorpe Games Room, a combat bracelet to the Warriors' Guild, a house teleport with your player-owned house set to Taverley or a Falador teleport and walk to Taverley). Make sure you have spoken to the Seer before you attempt to catch this scorpion; otherwise, you will not be able to push the false wall.

The location of the first Kharidian scorpion.

If you have level 80 Agility, use the shortcut to the poison spiders or If you have level 70 Agility, use the shortcut to the blue dragons; otherwise, walk around and use the dusty key on the gate to blue dragons. (If you need to acquire a dusty key, follow the track towards the Black Knights' Base and kill the jailer located in the eastern area of the base, who will drop a jail key. Use the jail key on the door of the cell containing Velrak the explorer. Speak to him; ask if there are any good places to explore, and when he asks you if you want to go further into the dungeon, say yes and he will give you a dusty key.) Then, go south of the dragons and west to the black demons; then, go north to where the poison spiders are. It should be fairly easy to spot a small room nearby with a false wall you can push at the south of the two coffins. Use the scorpion cage on the small scorpion inside this room to catch it (if you try to pick it up, it will sting you for 3 damage).

The location of the second Kharidian scorpion.

Returning to the Seer will reveal the location of the second and third scorpion. He will hint to a merchant in Barbarian Village, Peksa will say he left it in the bed of a relative as a surprise gift while visiting; it's actually in the Barbarian Outpost (use a games necklace to teleport there). The scorpion is wandering around the grounds just inside the entrance of the Agility training arena. To get in, you'll have to have completed Alfred Grimhand's Barcrawl. You can head back to the Seer to get the location of the third and final scorpion if you've forgotten.

The location of the third Kharid Scorpion.

The last scorpion is in the Edgeville Monastery on the 1st floor[UK]2nd floor[US]; go up the southeastern ladder (either use a combat bracelet to teleport directly there or use an amulet of glory to teleport to Edgeville and walk west) and use your cage on the scorpion to catch it.

If you have never visited the monastery, you need to speak with Abbot Langley beforehand. You'll need to have 31 Prayer to go upstairs. 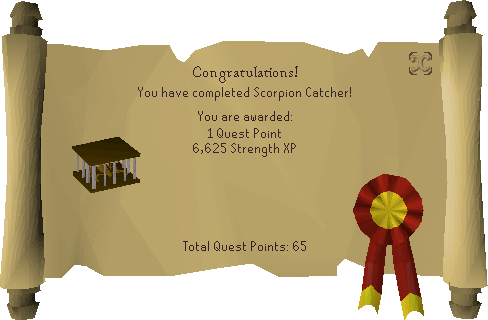