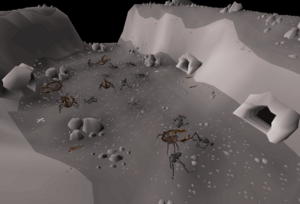 The Scorpion Pit is a valley in the northern portion of the Wilderness extending from level 53 to 55. The surface of the pit is infested with many level 14 Scorpions. With the Wilderness Rejuvenation update, several cave entrances (3 in the north and south) can now be interacted with, which takes the player into an underground cavern which contains Scorpia and her offspring.

On the valley itself, there are several headless arrow and bone spawns, along with many level 14 Scorpions. The Scorpion Pit (both inside and outside), along with the surrounding area is multi-combat, and is a hotspot for PKers who come to kill Scorpia hunters. Players should take caution around the pit as the Chaos Elemental can also wander into the Scorpion Pit, dealing high damage to lower-levelled players.