Scrubfoot's cave is a snowy cavern containing several goblins, red and green fireflies, and a timed sledding course. It is located to the west of Goblin Village.

The upper level of the cave contains a sled, which the player must take in order to ride the winding path down to the lower room. The course is timed, and along its length are spots where the player is forced to slide over either smooth ice or rocks. The player's speed is reduced upon touching rocks, while a temporary speed boost is granted for using the smooth ice instead. While the locations along the course where this choice must be made are static, it is variable which side of the path will have ice and which will have rocks, thus adding an element of randomness to the course. 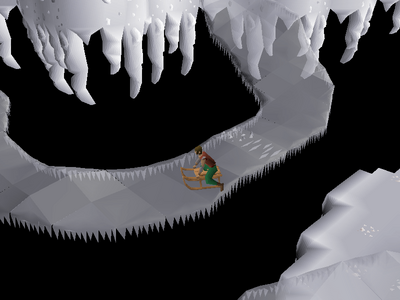 A player racing on the course; behind him is a patch of ice and rocks.
Retrieved from ‘https://oldschool.runescape.wiki/w/Scrubfoot%27s_cave?oldid=14009023’
Categories:
Hidden category: