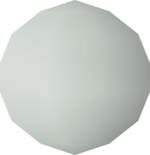 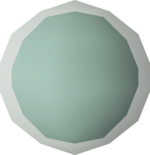 The scrying orb is an item used in the Enter the Abyss miniquest, given by the Mage of Zamorak located in the south-east section of Varrock, in the Zamorak church. This item has a one time use for the sole purpose of this mini-quest and is henceforth never used.

Should the player die with the orb in their inventory or destroy it, the orb will be lost. However, when acquiring a new one from the Mage of Zamorak, the quest progress will be saved and it is not needed to return to the essence mine again. If a fully charged orb is lost, the quest progress is still saved, but you will be given an unfilled orb which can be filled by teleporting to the rune essence mine from Aubury close by.