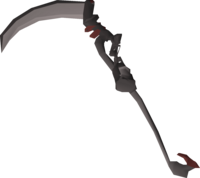 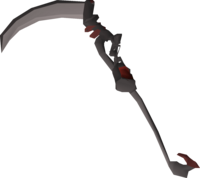 The scythe of Vitur is a two-handed slash weapon requiring 80 Attack and 90 Strength to wield, available as a rare drop from the Theatre of Blood.

The scythe can hit up to three enemies simultaneously in a 1x3 arc in front of the player. Each hit can also hit large creatures (a target that takes up two or more game squares) up to three times in the same attack. Each hit is rolled independently, both for accuracy (based on their attack bonuses versus the NPC's defence bonuses) and damage. However, the second and third hit deal reduced damage; the second deals 50% of normal and the third deals 25% of normal. The scythe can only hit a maximum of three NPCs, and can only hit a maximum of three times. 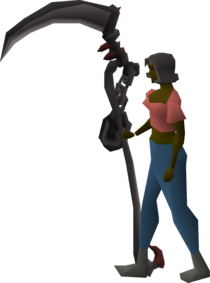 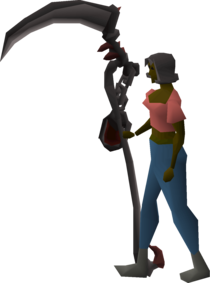 A player attacks three opponents simultaneously with the scythe of Vitur.

The scythe may be charged to drastically increase its stats. In order to charge it, players must add at least one vial of blood and a set of 300 blood runes to the vyre well next to the bank in Ver Sinhaza. Additionally, once Sins of the Father quest is completed, there is a vyre well outside the bank in Darkmeyer.

Each vial and 300 blood runes adds 100 charges to the scythe, with it being able to hold up to 20,000 charges (costing 792.42 coins per attack, and a total of 15,848,400 to fully charge it with 60,000 blood runes and 200 vials of blood). One charge is deducted per attack, and it will always lose a charge whether or not it hits. The hourly rate of using the scythe is 950,904 coins, meaning the scythe has to generate at least that much more gold in drop value from a boss or monster in order to be worth using over other weapons without an upkeep cost in terms of profit. The fully charged scythe will last for 16.66 hours of continuous combat before reverting to its uncharged form.

Once the charges are added to the scythe, they can be returned by using the scythe on the vyre wells in Ver Sinhaza should players decide to uncharge the scythe. Charges left will be rounded down at 100 hits per charge; for example, with 1,275 hits remaining, 1,200 charges will be deposited. These charges may then be withdrawn from the well to receive the blood runes and vials of blood back. Uncharging outside the well, however, will not return blood runes or vials of blood.

In the event of a PvP death, and the scythe is not kept, then all charges will be lost and the person to get the scythe will not receive any blood runes or vials of blood.