From Old School RuneScape Wiki
Jump to navigation Jump to search
This article is about the beta version. For the released version, see Scythe of vitur. 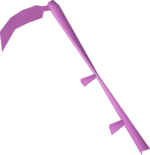 The Scythe of vitur is a slash weapon requiring 75 Attack and Strength to wield. It is only available from the supplies table in an unrestricted world as a test weapon for players. As it was a test weapon, the graphics were used as a placeholder, using a pink scythe.

The scythe can hit up to three enemies once in a 1x3 arc in front of the player. Each hit can also hit large creatures up to three times in the same attack. The scythe can only hit a maximum of three NPCs and can only hit a maximum of three times. The first hit deals 100% damage, the 2nd deals 50% and the 3rd deals 25%. Each attack, regardless of which enemy is the player's primary target, is rolled independently based on their attack bonuses versus the NPCs defence bonuses.