The Sea Troll Queen is a boss monster encountered during the quest Swan Song. She is the monarch of the Sea Trolls, and the apparent leader of the attack on the Piscatoris Fishing Colony by the Sea trolls.

After the Sea Troll General's demise, the Sea Troll Queen emerges from the water to launch a surprise attack. She is able to inflict a single hit of 254 damage on the Wise Old Man, leaving him incapacitated. The player must then defend the colony from her by themselves.

Like many other boss monsters, a Dwarf multicannon will not work on her; she will immediately destroy it. 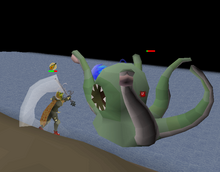 Important: It is critical to defeat the Sea Troll Queen as fast as possible if using Prayer. Her draining attack drains over 20 Prayer points at once. In any case, bringing Prayer potions is advised.

The Sea Troll Queen attacks using Melee (crush) and, more often, a magic projectile resembling Water Wave, with the latter being her more powerful attack. The Sea Troll Queen cannot move during the fight, and instead reverts to her prayer-draining ability should the player remain outside of melee distance with an overhead prayer active.

Generally, the best way to deal with the Sea Troll Queen is to use Protect from Magic and tank the melee attacks in order to prevent the occurrence of prayer drains. Conversely, fighting her at range should only be attempted by players who are prepared to use many prayer potions or withstand powerful magic attacks.

The Sea Troll Queen's most prominent weaknesses are stab and ranged attacks. She is most resistant to magic attacks due to having a very high magic level. Therefore, it is advantageous to plan your equipment accordingly before starting this section of the quest. It is also helpful to bring a secondary weapon for its special attack such as a dragon halberd.