From Old School RuneScape Wiki
Jump to: navigation, search
The RuneScape Wiki also has an article on: rsw:Sea slug (race)
This article is about the species. For the quest, see Sea Slug.
Sea slug

Sea slugs (Opisthobranchia alucinor) are a race of slug-like creatures which are able to control the minds of humans by latching on to them. They are ruled by the Mother Mallum. 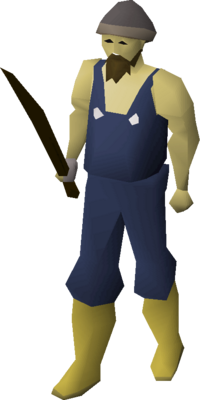 One of the victims on the fishing platform.

The next step in their plans was to free their leader from the prison in which the Temple Knights had sealed thousands of years ago. How they arrived at Witchaven is uncertain. Mayor Eustace Hobb announced he'd be renovating the shrine to the west. Soon villagers began to become possessed and the Temple Knights of Falador wanted to know why. Soon an adventurer discovered their plans of releasing Mother Mallum but was unable to stop them. However the adventurer managed to kill the slug prince before barely escaping Mother Mallum's possession attempt.

The rest of the population of Witchaven was possessed and the town became the first in RuneScape to fall to the Sea Slugs.

During Sea Slug Bailey refers to the creatures as crustaceans, though they are most likely members of the phylum Mollusca as other terrestrial slugs and most other sea slugs are.