Seasonal Deadman Mode (SDM) is a variation game style for Old School RuneScape introduced in March 2016. Unlike its popular predecessor, Deadman Mode (DMM), all player stats and items are reset every three months at which point the top 2000 players on the highscores list are invited into a Seasonal Deadman Tournament. There are several differences between traditional Olds 5 in season 1, season 2 Experience will still be very quick at lower levels, but the more you train your stats the smaller your experience multiplier will get:

More information on skulls, death penalty, and other rules are outlined in their respective sections below. 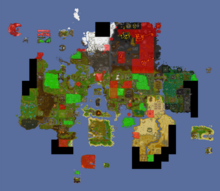 There are several safe areas, marked with green highlight in Diagram 1 below, which are protected by level 1337 Guards. If a skulled player enters these areas, or a player receives a skull by attacking another player within this area, they will be Ice Barraged and attacked by the Guards until death. Additionally, areas marked with red highlight in Diagram 1 are multi-combat zones, where any number of players may attack the same target.

When a player attacks any other player that does not have a skull emblem, that player will receive a skull and a countdown timer starting at 15 minutes (or 30 minutes if the player is less than 30 levels below you). Once a player receives a skull they may not enter protected safe zones. If a player remains still or inside their player-owned house (POH) or in an instanced area their skull countdown timer will not decrease. After their countdown timer reaches 0, or upon death, that player will lose their skull and will be able to enter safe zones once again.

Five out of six types of skull emblems, relating to the number of kills a player has attained; one kill (left) up to five or more kills (right).

Additionally, other players who attack a player with a skull emblem will also receive a skull themselves. However this skull will only last for 5 minutes.

There are six types of skulls, each relating to the number of kills (0-5+) that player has attained during the lifetime of their skull emblem.

A death in Deadman mode is no joke. If you die to a player you will lose the 28 most valuable stacks of items from your bank to a bank raid, all items that you have on your person and 50% of the experience you have gained in any unprotected skills.


If you are unskulled when dying to a player you will lose the 28 most valuable stacks of items from your bank to a bank raid, all items that you have on your person and 25% of the experience you have gained in any unprotected skills.


If you die to a monster when you have a PK skull you will lose the 28 most valuable stacks of items from your bank, all items that you have on your person and half of the experience you have gained in any unprotected skills.


If you die to a monster when you do not have a PK skull and have not taken damage from a player you will lose all of the items on your person except for the 3 most valuable. You will not lose experience or any items from your bank.


If you die with a skull inside a guarded zone, you will now lose 10% of your experience in protected skills in addition to the existing item and XP loss.

If you die without a skull inside a guarded zone, you will not lose any experience in your protected skills.

If you manage to kill a player in Deadman mode you will receive a key drop. This key will give you access to a chest that holds the 28 most valuable stacks of items from the bank of the player you killed.

Getting to this chest is no easy task, though. The chests are located in safe areas meaning you will not be able to use a key until your PK skull expires. If you choose to take your chances and go for a kill you will have a hard time staying alive for the 30 minutes your skull lasts for.

You can protect 5 skills in total: 2 combat skills an 1m (respectively) to prevent your Hitpoints falling below that level again. 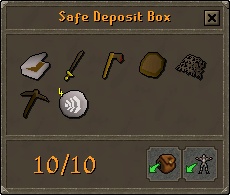 Seasonal Deadman Mode is very competitive, so it is important to be prepared and start the game at the very beginning of the season. Since there are no PvP combat level restrictions, it is highly advantageous to start training early to have a competitive combat level. The remaining sections under Strategy will help give you ideas on the kind of things you should work towards to get the most out of your SDM experience.

Starting right from Tutorial Island, speak to Skippy to skip the tutorial and jump right into the game. Depending on your plan you can teleport to Lumbridge, Ardougne (TODO others..). One of the first things you will want to do is receive your 10k gp reward from the Stronghold of Security for a nice early game boost. You can also collect Steel platelegs or Steel platebodies from the deep wilderness for starting gold. You can also take advantage of cheap powerful food: kebabs in Al Kharid or jugs of wine in Draynor Village. While you're in Draynor Village, buy a rope from Ned; you will need it if you want to do the Waterfall Quest, which is the easiest way to get starting combat levels and even more starting gold.

This strategy mainly focuses on the extreme dominance of magic in the early game, utilising the instant funds from the Stronghold of Security to quickly gain access to powerful spells such as Fire Strike, which can provide easy kills on other players just starting the game, in locations such as the Stronghold of Security, Draynor Manor, Wizards' Tower and the Dorgesh-Kaan mine.

This strategy prioritises the quests Desert Treasure and Animal Magnetism, aiming to complete the two quests in the first few days of the season. Utilising the extreme strength of Ancient Magicks and Ice spells, combined with the high DPS output of the Magic shortbow, which excels in the mid game, where Saradomin brews are not readily accessible by the majority of players. This will allow players to quickly deplete the food supply of their target while preventing them from running to a safe zone. With most players having access to Protection prayers, utilising two styles is extremely effective, enabling players to win most one-on-one encounters during the mid game.

This strategy aims to dominate the late-game, where abundant access to Saradomin brews means that DPS is no longer effective, requiring players to secure kills with the KO potential of weapons such as the Dragon dagger and Granite maul. Usually, players would aim to complete Monkey Madness I as early as Day 1, and secure the Dragon defender by the first week, before the Warriors' Guild becomes completely controlled by clans.

Some players prefer to train Slayer along with their melee stats, securing income through Gargoyles, Aberrant spectres and Abyssal demons, and completing Desert Treasure somewhere in the second week. This strategy relies on the relative safety of the Stronghold Slayer Cave, which gets more dangerous as time goes on.

Other variants include rushing quests in the early game, focusing on unlocking Barrows gloves before clans begin to camp the popular quest spots, then training stats behind the curve.

Many account builds take advantage of the fresh economy, specialising in a certain skill to provide insane sources of income. For example, in the early game, Crafting is an excellent source of income, providing access to high-demand items such as dragonhide armour, amulets and rings. Smithing provides access to high-demand items such as the mithril axe, and rune armour. Herblore can provide insane amounts of money, as high-level potions such as super strength, stamina and Saradomin brews can be sold at extreme prices, should a player be one of the first to unlock the required Herblore level. Naturally, gathering skills such as Fishing, Woodcutting, Mining and Hunter will always generate income.

Rebuilding: You need a method of rebuilding in deadman mode because you will die.

Your "food" inventory should consist of:

"lower level accounts should have lobs or higher around 50 combat"

End level content: God Wars Dungeon (for 85+ Attack, Strength, and Defence if you get that far). Any rare drop from God Wars in DMM Seasonal is better than 3rd age in Old School RuneScape.

Purchase swords/bows/runes in Varrock, train anywhere in RuneScape, focus on safe zones on men/women for herb drops, ranarrs will sell the easiest. (Bone crossbow can fire bronze bolts which are 1gp ea at the shop)

Range: Tzhaar City, run into Jad instance if encountered by pkers, make sure to have tank for a few steps and high magic defence along with overhead prayers.

Clans are an essential part of DMM and SDM, A lot of teams go pking in multi areas, trying to lure people in, having a clan means you can do this but also when you are getting attacked they can come to aid you. Singles was pointless in SDM Season 1, but in SDM Season 2 there are no PJ timers so people can now singles pk so clans are less reliant.

When DMM was first released, there existed a glitch that allowed players to attack other players within a safe zone, without getting skulled. This meant that there was no risk on the pkers side, and that they could obtain loot and redeem bank keys quickly. Only a few players knew the glitch, which was patched within the week, and the players who unfairly died in safe zones did not receive their items back.