The seed vault is a storage system found in the Farming Guild, directly west of the bank chest. It functions much like a bank, being able to store all common types of seeds and saplings used in Farming, but not seeds or sapling given through quests. The seed vault does not store seedlings that have not grown into saplings.

The vault has a "Favourite Slots" tab where players can place up to eight types of seeds they frequently use, readily accessible for convenience. Similar to banks, it can also leave placeholders and it has a search function.

In addition, if players receive seeds from Managing Miscellania that are already present in the seed vault, they will automatically be transferred to the vault rather than the player's bank. For seeds that the player receives that aren't present in the vault, it will be placed in their bank instead. 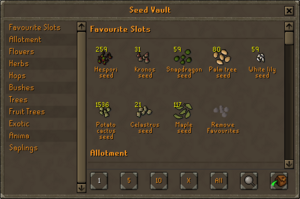 The interface that opens when opening the seed vault.

The seed vault's primary usage is to reduce the amount of bank space used by seeds and saplings. Seeds or saplings stored in the vault are only accessible by interacting with the vault itself, so players may not want to store any farming or tree run supplies within. The seed vault is ideally used for storing seeds and saplings that are not commonly needed, or for storing those that may be necessary for farming contracts.

Seeds that can be stored[edit | edit source] 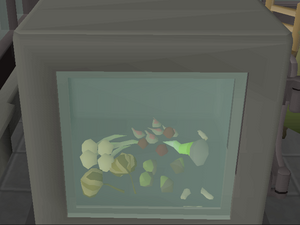 The assortment of seeds visible in the seed vault.
Retrieved from ‘https://oldschool.runescape.wiki/w/Seed_vault?oldid=14213488’
Categories:
Hidden category: