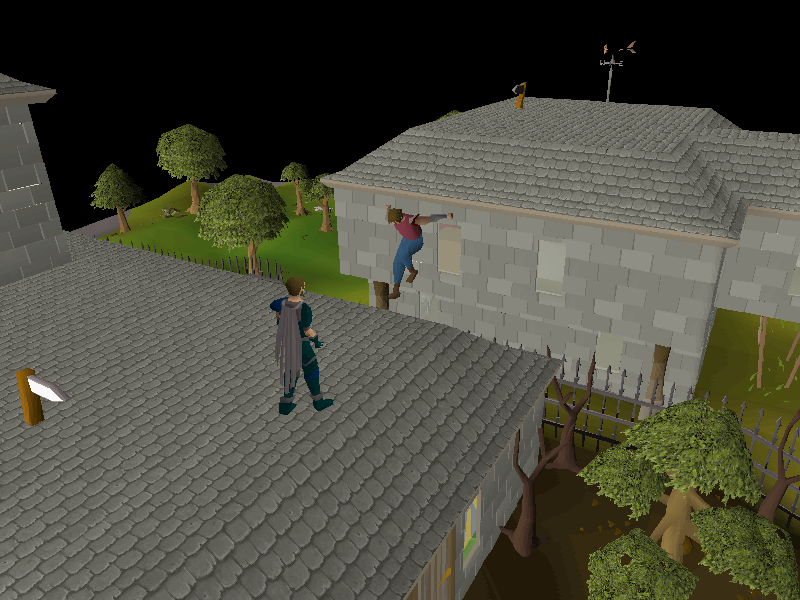 The Seers' Village Rooftop Agility Course is available to players with an Agility level of 60. It is preceded by the Falador Rooftop Course and followed by the Pollnivneach Rooftop Course.

The Seers' Village Rooftop Agility Course can be started by climbing up the wall near the entrance of Seer's Village bank and is finished by jumping off the roof of the church, by the Yew trees. Players gain 570 experience in total per completed lap of the course. The course can be a destination for an elite clue scroll step, where players are required to search a crate on top one of the buildings that is part of the Agility course.

If this course is started at level 60, it would take 814 complete laps to reach level 70.

Completing the Hard Kandarin Diary for the Camelot teleport Camelot Teleport in front of Seers' bank will cut a significant amount of time going back to the start, and in addition to increasing the experience gained per hour will result in more marks obtained.

The following is a small sample tests of 100 laps, done without using the hard diary teleport reward, taking approximately 80 minutes each, or 48 seconds per lap. During tests, the rate of marks seemed to increase slightly towards the end of the session, indicating that time spent on the course might increase the spawn rate after a certain time spent.

From these results, we can see that, on average, the baseline rate of marks on the Seers' course is one mark every five laps. However, it should be noted that the rate at which marks spawn is based on time spent on the course, so given that this data assumes consistent laps of one per 48 seconds, we can conclude that Seers' course marks spawn once every four minutes, on average.