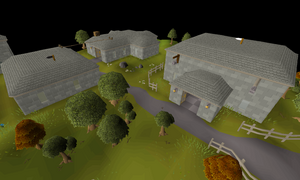 Seers' Village is a small settlement to the west of Camelot. The mighty city of Ardougne is to the south, and Rellekka and Sinclair Mansion are to the north.

Before the release of the Grand Exchange, the Seers' Village bank used to be a very popular trading spot. From here, most Fletching items such as flax and bow strings were sold. The bank was also a popular trading arena for Treasure Trail rewards and rare items.

Players with 60 Agility can use the rooftop course, by climbing up the wall on the southeastern side of the bank. The course finishes in front of the church.

If players have completed the Kandarin Diary, the flax keeper will exchange players a certain amount of flax for bow strings each day, increasing as the players completes more of the diary.

The beehive field is located south-east of Seers' Village. It's just to the east of the flax field. As suggested by the name, it contains many beehives. These beehives are used during the Merlin's Crystal quest by using insect repellant found in Catherby on a hive. Players may also be teleported here to help re-construct a hive in a random event.

The Saradomin altar is located north-west of the flax field. Inside the Graveyard located at the front of this altar are several yew trees for Woodcutting.

The Poison Salesman loiters west of the bank in the bar and plays a role in The Fremennik Trials and Murder Mystery quests.

The local pub is one of the target bars in Alfred Grimhand's Barcrawl. It is also a common place for players training their Ranged skill due to the fact that there are many level 2 men and women in the pub with many tables to prevent retaliation.

North of the bar is a small building with several Coal Trucks inside it. From here, players can retrieve all of the coal mined from the coal trucks, providing it was loaded into the carts at the coal trucks. A coal cart can hold up to 120 coal, but it can hold more coal after completion of certain difficulties of the Kandarin Diary.

To the west of Seers' Village, McGrubor's Wood is used in the Fishing Contest and Plague City quests. The residents will not let players through the front entrance, so players will need to squeeze through some railings at the back. Be careful as level 44 guard dogs patrol the area.

Located south-east of the bank, the Courthouse is instrumental in the King's Ransom quest. Here, you defend Anna Sinclair, and strive to achieve a non-guilty verdict. The courthouse replaced the Party Room with Jagex's update to Seers' Village. Many players complain about this. However, as it was moved to Falador, it is now F2P.