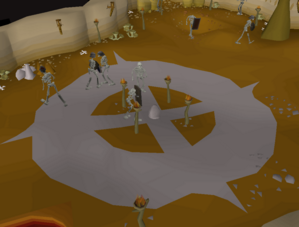 Senntisten was the capital city of the Zarosian Empire, which existed during the Second and Third Age. According to archaeologists it housed a mass temple complex and occupied the rough area east of modern-day Varrock and parts of Silvarea, making it one of the largest known cities in history. Even after the fall of Zaros at the hands of his general Zamorak, the city continued to act as capital and managed to survive into the late part of the God Wars, where it was eventually conquered by Zamorakian forces. Although under Zamorakian occupation the city was in the end destroyed and later conquered by Saradominists, who built the city Saranthium, where the Zarosian capital once stood.

Senntisten lies in what currently known as the Digsite and is currently being excavated by the Varrock Museum. During The Dig Site quest, the player finds a Zarosian symbol and a ancient tablet in an undiscovered temple ruin.

Those with the knowledge of Ancient Magicks can utilise a Zarosian spell, Senntisten Teleport, to teleport here, requiring 60 Magic, two law runes and one soul rune. Also, the Digsite pendant can be used.