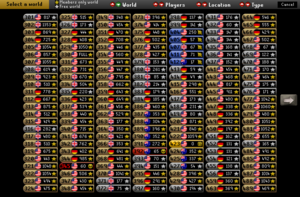 This is the list of worlds and their respective activities. There are currently 155 normal members worlds and 78 free-to-play worlds.

Because each world has its own shop inventory, players will often change worlds rapidly to buy from one store many different times. Also, players often switch worlds to find more favourable conditions (e.g. more populated) for minigames, player killing, or trading. This is known as world hopping.

Normally some PvP worlds are affected by the PvP world rotation, changing when they are available in one week intervals. This is to reduce the number of worlds to make each more active, while changing locations to provide fairer lag to players across the world.

This rotation is currently active for the next 7 days.

This rotation is currently inactive.

High Risk worlds (currently worlds 365, 474, 533, and PvP world 548) are worlds where players will lose all items on death due to having a special skull status over the head (

) at all times. Going into these worlds can be a risky, but good way to make money if you have a high Combat level with good armour and weapons and are proficient in player-versus-player combat. It is strongly recommended that you only take items that you are willing to lose! Also, note that World 365, 474, and 533 are "safe" worlds unless you go into the Wilderness as they are not PvP worlds.

Upon killing any opponent, you will always get the items they were wearing and carrying, unless the item is (or was) untradeable, in which case will usually turn into a stack of gold coins according to its value.

A warning is shown on attempting to login to a high-risk server from the login screen. If using the World Switcher instead, a confirmation will appear. Upon logging into a PvP world, a chat message will appear saying This is a PvP World. Players may attack you once you leave this safe area.