The Settlement Ruins is a village found south-west of the Wintertodt Camp in the Northern Tundras. The north entrance is guarded by aggressive level-132 ice wolves, while the settlement itself is inhabited by ice giants and ice spiders. The southern entrance can be accessed north of the Tower of Magic.

From the appearance of the settlement and the frozen warriors found there, it is assumed the settlement was destroyed after the Wintertodt ravaged Great Kourend during the The Long Winter 1,400 years ago.

North of the settlement, there is a mysterious symbol on the ground, appearing to resemble that of Zaros. Its origins, and its relation to the area around it, remain unknown. 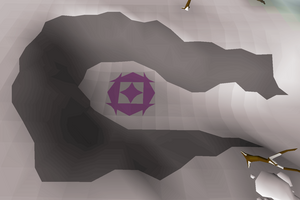