From Old School RuneScape Wiki
Jump to: navigation, search
The RuneScape Wiki also has an article on: rsw:Shadow Realm
This article is about the hidden realm. For the book, see The shadow realm. 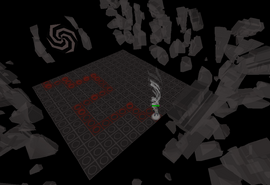 A player is dragged into the Shadow Realm by Sotetseg.

The Shadow Realm is a realm that is, in some sense, a hidden part of Gielinor rather than a separate dimension. It forms an invisible layer of reality seemingly spanning the entire world. Objects and people that are inside the Shadow Realm are normally not visible to people outside of it, although it is still possible to see them using a ring of visibility. Some beings, such as certain Gods and Mahjarrats, are also able to see things hiding in the Shadow Realm, seemingly without any external aid.

Objects from the Shadow Realm are featured in several quests and miniquests such as the entrance to the Shadow Dungeon in Desert Treasure, the ghostly robes in the Curse of the Empty Lord, and the shadow sword in The General's Shadow. In addition, during the fight with Sotetseg in the Theatre of Blood, it is able to target a player and send them into the Shadow Realm.