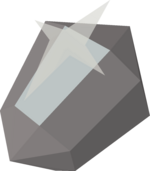 The shadow diamond is one of the four Diamonds of Azzanadra which must be obtained during the Desert Treasure quest. It is located in the Shadow Dungeon and is obtained by killing both of Damis' forms.

Should the player lose the diamond or want to collect another via drop trick, crossing into the dungeon's multi-combat zone at at the end of the corridor connecting to the open area where Damis was fought, will spawn another. To keep a copy of the diamond after the quest, drop a duplicate before putting the last Diamond of Azzanadra into the pyramid's final unpowered obelisk and it will be safely kept afterwards, even upon quest completion.

For an exhaustive list of all known sources for this item, see here (include RDT).
Retrieved from ‘https://oldschool.runescape.wiki/w/Shadow_diamond?oldid=14148751’
Categories:
Hidden category: