Shadow of the Storm

From Old School RuneScape Wiki
Jump to navigation Jump to search
The RuneScape Wiki also has an article on: rsw:Shadow of the Storm

Shadow of the Storm is a quest that continues the plot of Demon Slayer. It involves the villain Denath once more, as well as his group of followers attempting to summon a dangerous demon named Agrith-Naar.

Items required: Silverlight, black dye (or vial and pestle and mortar), 3 items of black clothing (see below), transport to Uzer (e.g. necklace of passage; or ring of dueling, Shantay pass and 200 coins)

Talk to Father Reen, south of Al Kharid bank. If you do not have a regular Silverlight, he will give you an uncoloured Silverlight free of charge. If you already have a dyed Silverlight, bank the extra Silverlight. If this dialogue is missed, Silverlight can still be obtained at other points in the quest by speaking to him.

After you start, travel to Uzer (you can enter the desert via the Shantay Pass and use the magic carpet, rub a necklace of passage to Eagles' Eyrie and run south-east or travel with fairy rings to DLQ and run north-east). Be sure to bring your Silverlight with you since you won't be able to continue without it. After arriving in Uzer, talk to Father Badden - be sure to talk to him about all your options. Afterwards, enter the dungeon.

When you try to enter the demon's lair, Evil Dave won't let you by because you aren't evil enough. You need to wear at least three items of black clothing. There are several ways to achieve this, including: 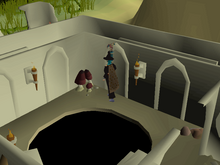 A black mushroom near the entrance.

You also need to dye your Silverlight black using black dye (this doesn't count as an "evil" item).

Note: You cannot proceed with the quest if you have a normal Silverlight alongside a dyed Silverlight.

Equip your three black items, then tell Evil Dave you want to join the group, and he will let you through the portal. Evil Dave will take you to the leader of the group, Denath. He will tell you that he needs your help to summon Agrith-Naar, since Josef left. He will tell you the incantation to use, which is different for everyone, so you need to write it down. In case you forget the incantation, you can read the tome you'll find later on and cite the phrase in it backwards.

Optional: Using a chisel and hammer on the demon's throne will give the player six cut gems: two sapphires, two rubies and two emeralds. While this can be done during The Golem quest, it can alternatively be completed during this quest.

Evil Dave introduces their newest dark wizard, you, to Denath.

Talk to Jennifer to get a demonic sigil mould. Then, talk to Matthew about Josef. He will tell you to find the book that Josef dropped in order to defeat the demon. Talk to the clay golem who will explain that Denath killed Josef, but not before Josef hid the book in the kiln outside. You must talk to the golem before you can search the kiln!

In Uzer, search the kilns that are outside until you find a Demonic Tome. There are two close by, and two further away. One is north of the magic carpet, and the other is east of the temple. There are 4 kilns in total.

Go to any furnace (such as the furnace in Lumbridge or in Al Kharid), and make a demonic sigil with your silver bar. With the sigil, you will be able to chant the incantation with the group.

You no longer need your black equipment to enter the portal. If you need to gear up for the fight, save a trip and bring what you need. You will need 3 free inventory slots. 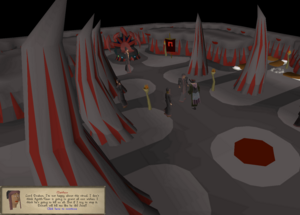 Matthew begins to suspect something evil is afoot.

Note: After speaking with Matthew, you will be able to enter the portal with the original Silverlight as Evil Dave is not guarding the entrance anymore.

Denath walks into the centre of the circle, teleporting away!

When you have finished, Denath will call you over to stand next to him and lead the incantation. Using your sigil, chant it in the order that he told you (if you have forgotten, it's written in the book, but backwards). After the portal is opened, instead of the demon coming out of it, Denath will walk into it and disappear. It turns out Denath was Agrith-Naar all along, and you actually desummoned him by saying the incantation backwards, as he intended.

This demon becomes much more powerful in his own dimension, so you need to resummon him and defeat him. Pick up the sigil that Denath dropped (if you don't, you will have to make another one).

Evil Dave, Eric, and Tanya will have run away, so chase after them through the portal. Tanya is killed by ghosts, so take her sigil as well. Eric is killed by a falling stone. Convince Evil Dave to return to the lair, and he will give you Eric's sigil. Leave the dungeon and talk to Father Badden and Father Reen. Convince them to help with the ritual and give them both a sigil. You need one more individual to complete the incanctation, so talk to the Clay Golem. However, he was programmed to never help summon demons. Use the strange implement (can be found in the lair) on him to take out the scroll about demon rituals. Speak to the golem again and he will agree to help you. 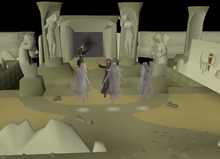 Tanya is killed by ghosts during her attempt to flee.

Return to the demon's lair, enter the portal and talk to Matthew to get everyone to stand in the circle. Chant the incantation with your sigil, this time in the order that you read in the book (the opposite order that you chanted it in last time). Agrith-Naar will immediately appear and turn to Matthew, killing him in the belief that he started the ritual. Your character will then say that you commenced it, prompting the demon to attack you.

Note: You cannot use a Dwarf multicannon during the bossfight, as you'll get a message saying "Some kind of demonic magic prevents the cannon from functioning". 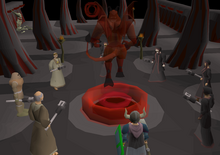 Agrith-Naar is a level 100 demon who remains in the same position throughout the fight. He uses both Melee and Fire Blast depending on where you are and what Protection prayers you have activated. He uses melee by default, but switches to Fire Blast if you activate Protect from Melee or walk out of range. If you walk out of melee range and activate Protect from Magic, he will cast Telekinetic Grab to teleport you next to him. Note: You can potentially have full protection by using Protect from Magic and flinching from two squares away, running out of melee range immediately after he casts Telekinetic Grab. However this method requires precise timing and is not simple to pull off. 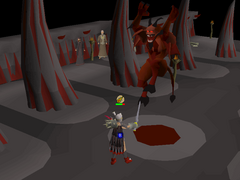 Warning: If you are flinching the boss with the Silverlight and move behind a pillar or torch before the final blow is registered (between the XP drop and the damage being dealt), then it will not count, and Agrith-Naar will recover a small bit of health.

Once the demon is dead, your Silverlight will have been merged with the demon's blood into a stronger weapon, the Darklight. Note: If your prayer runs out during the message or you cancel the chat, un-equipping Darklight will trigger the final dialogue to complete the quest. 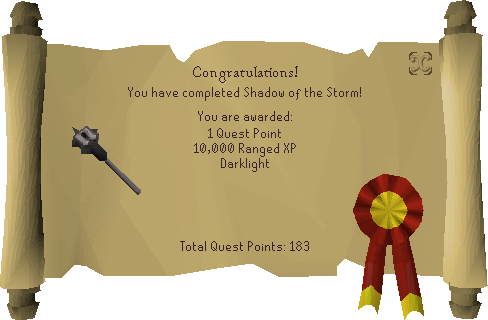 Completion of Shadow of the Storm is required for the following: