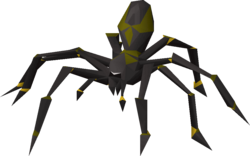 They can never take away a player's last prayer point.

Shadow spiders found in the Waterfall Dungeon are unaggressive to players with a combat level of 105 or higher.

The following drops are only accessible while on a slayer assignment given by Krystilia.