The Shaeded Beast is a monster that has possessed Olbertus, a treasure hunter. It can be seen in the Altar of the Sun if players are wearing a ring of visibility, and becomes fully visible if players choose to kill Olbertus instead of giving him five dragonstones. 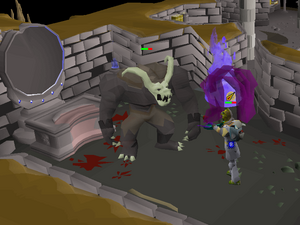 The players fights the Shaeded Beast.

Upon appearing, it will place a curse on the nearby altar, changing its appearance to depict an eclipsed moon. The Cursed Altar will fully drain the player's prayer points, as well as dealing up to 30 damage if attempting to pray there; the curse will remain indefinitely until the player lifts it by offering 100 babydragon bones, dragon bones, lava dragon bones or superior dragon bones to the sacred bone burner. Because of the cost of the bones compared to five dragonstones, it is not advised to choose to kill Olbertus, as even having the Shaeded Beast appear would result in the altar becoming cursed.

During the fight, the player's prayer points will drain by 5, once every 6 seconds or so. To counteract this, bringing 3 prayer potions should suffice for mid-level players. The beast has no other mechanics, making it an easy fight provided the player maintains Protect from Magic.

Upon defeating it, he will drop the temple coin.

Drop rates estimated based on 971 kills from the Drop Rate Project, unless otherwise cited.