The Shattered Relics League was the third league in Old School RuneScape. Originally set to release on 3 November 2021, the launch was delayed to 19 January 2022, and the league ended on 16 March 2022. It was announced on 3 February 2022 in a Modcast Q&A that it would be extended by two weeks, originally ending on 2 March 2022. The theme was set around collection and adventure and it was the first league to expand upon the lore of the game mode, with the introduction of The Sage. 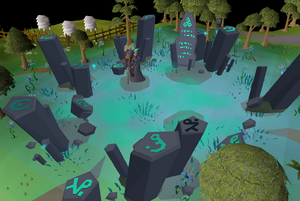 The area where players arrive upon logging into a Shattered Relics League world.

In this iteration of Leagues, players have access to the entirety of the world map, rather than the area-restricted Twisted and Trailblazer Leagues. However, players do not have full access to their skills and various bosses; they must be unlocked through the use of Sage's Renown, a type of currency earned by completing specific tasks within the Shattered Relics League. In addition to Sage's Renown, completing these tasks also earns league points that can be used to purchase cosmetic rewards from the Leagues Reward Shop upon the end of the Shattered Relics League.

Relics, which are unlocks with powerful effects in past Leagues, are shattered into less-powerful fragments for this League. These fragments are collected by engaging in various activities within the League, such as skilling, minigames, and combat. While players initially can only equip one fragment, they can unlock the ability to equip more as additional tasks are completed.

Unlike the first two leagues, there are no area restrictions in the Shattered Relics League. Instead, players begin the league with most Skills and Bosses locked, which can be unlocked with Sage's Renown. Players begin the league on the outskirts of Catherby, by The Sage. The free Home Teleport spell in each spellbook is also redirected to Catherby. Waystones are placed in key locations that allow players to quickly teleport around the world for free after unlocking them.[1]

During the league, a multiplier was active for all experience gained, run energy never depleted, and clue scrolls were dropped as scroll boxes instead.[2]

As with all leagues, all accounts are automatically set to standard Ironman Mode. 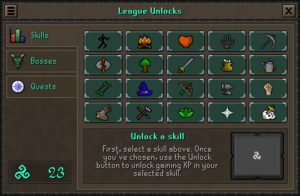 As the player progresses through the league, you'll gain different passive effects as you level up through tiers. Items affected by the boosted drop rates can be found here. 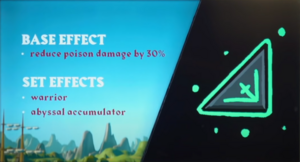 An example of a Shattered Relics League fragment revealed during the Old School's Summer Summit.

Relics have been shattered into fragments and scattered all across Gielinor by The Sage who is concerned about the power that players hold. Individually, fragments contain a small portion of a relic's power, but they can be combined to create powerful effects. Fragments can be obtained by various activities through the world through RNG means. The number of fragments equipped is limited by the number of fragment slots unlocked, up to a maximum of seven. Fragments can also be leveled up to level 3 by gaining experience while they are equipped.

Upon unlocking your first combat skill, you get a specific fragment for Melee, Magic or Ranged, along with a few starter items for the relevant combat style.

Set effects become active once the player has equipped enough fragments from the same set. Each set effect requires a varying amount of fragments, and there may be multiple tiers within each set.

Tasks in the Shattered Relics League allows players to earn league points and Sage's Renown, which allow the player to unlock more Fragment slots, skills, bosses and auto-unlock quests. Tasks span five different difficulty levels: Easy, Medium, Hard, Elite and Master. In the league, there are hundreds of tasks to complete, ranging from reaching a certain level in a skill to killing certain bosses. As with the previous league, tasks are also divided into regions[3] despite the entire world being accessible, except for boss instances and also categorised by skill.

With every task completed, league points and Sage's Renown will be rewarded based on the difficulty of the task.

After the league has concluded, players may spend league points to unlock rewards permanently. All the proposed rewards were polled and passed from October 7th-13th 2021.[4] Returning rewards from past leagues include League trophies, a Home Teleport animation, league themed outfits, and a league banner. New rewards include a Weapon Variety Pack, a Dwarven Multicannon Ornament Kit, and a Void Knight Ornament Kit.

League trophies range from bronze to dragon and are automatically rewarded to players based on their placement on the league HiScores. The trophies can be equipped and a unique emote can be accessed by right clicking on them. The trophies can also be displayed in a trophy case in a player-owned house.

A home teleport animation is a potential reward costing 1,000 league points. The new animation shows the character placing down relics before dragged into the ground by multiple hands.

This reward replaces the default animation for the Home Teleport spells.

The Shattered Themed Banner is a potential reward costing 500 league points. It can be worn in the main-hand slot, or displayed on the banner stand space in the League Hall of a player-owned house.

The weapon variety pack is a potential reward costing 1,500 league points that can be used on the following items: Abyssal whip, tentacle whip, rune crossbow, and god books. Each weapon kit may only be used on one item at a time.

The ornament kit for the dwarven multicannon costs 4,500 league points. It is the first of its kind, and offers a cosmetic override to a classic item. The ornament kit replaces the single rotating barrel with eight barrels fixed in place. This design is based on the original RuneScape Classic multicannon. It comes with 4 uses to be applied to the four individual cannons parts.

The Shattered relics void ornament kit is a potential reward costing 6,500 league points. It has 6 pieces that can be applied to the normal and elite versions of all three combat types.

The Shattered relics mystic ornament kit is a potential reward costing 1,000 league points. It has 5 pieces that can be applied to all variants of Mystic robes.

Upon logging in Shattered Relics League for the first time, players will watch an opening cinematic, which resembles a storybook of sorts with each frame representing a page and a bit of text.

Bug:
Freeing King Awowogei in the Recipe for Disaster sub-quest may sometimes glitch, resulting in Gypsy Aris telling the player to ask King Awowogei about his favourite food before serving a stuffed snake to Awowogei in the dining hall, even if Awowogei at Marim tells the player they're not interested in talking and the three monkeys in the north-west corner of the temple acknowledge the stuffed snake in the player's inventory to be ready to serve. If the player serves the stuffed snake successfully and receives the sub-quest experience reward with a green quest completion in the Quest List, the Leagues unlocks interface may still indicate freeing Awowogei is incomplete and cost Sage's Renown. (This issue may have been patched on 26 January 2022.)