Shayzien is one of the five cities in the Kingdom of Great Kourend. Led by Lord Shiro Shayzien of the Shayzien House, the city controls the Shayzien Army, the main military force providing law, order, and defence for the kingdom.

Most Shayzien citizens are part of the Army, and serve as the police force responsible for dealing with crime in Great Kourend, as well as defending the kingdom against the lizardmen, creatures created by Xeric, a powerful mage who reigned over Great Kourend in the past.

Shayzien is one of the more recent cities founded in the history of Great Kourend; it was founded by the legendary heroine Camorra Shayzien during the Dragonkin Conflicts 2,000 years ago.[1]

Players can gain favour with Shayzien by assisting them in various activities in the Shayzien Encampment. Earning Shayzien favour will allow players to fight lizardmen, tackle organised crime in the kingdom to help keep order, and earn tiers 1-5 Shayzien armour through the Combat Ring as the player earns more favour.

To progress in the Architectural Alliance miniquest, players must gain 100% Shayzien favour and speak to Shayda, who is found south of the Shayzien Administration building in the centre of Shayzien.

A player healing wounded soldiers in the infirmary.

Wounded soldiers can be found in the Infirmary within the Shayzien Encampment. In order to heal the soldiers, players must use Shayzien medpacks on them, which are found in medpack boxes by each tent in the Infirmary. To speed up the process, a player can right-click a medpack box to "Take-many" which instantly fills the player's empty inventory spaces with Shayzien medpacks. Players can rotate clockwise healing soldiers, as by the time players heals the last soldier, the first soldier healed will need healing once more.

Players are given 0.2% favour for every healed soldier; thus 500 soldiers must be healed if choosing this way to gain 100% favour. Though slow, it is the only method to gain Shayzien favour without engaging in any combat.

Once players have 5% favour, they are able kill lizardmen and their brute counterparts in the eastern Lizardman Canyon to gain 0.1% Shayzien favour per kill. Lizardmen are poisonous, so a way to cure poison is advised when killing them. The western half of the eastern section is a multicombat area, meaning a dwarven multicannon or burst spells can be used to earn favour quickly.

The western canyon, containing 3 lizardman shamans and only a few lizardmen, is only accessible to players with 100% Shayzien favour.

Lizardmen have a 1/250 chance of dropping a Xeric's talisman (this is increased to a 1/125 chance with completion of the easy Kourend & Kebos Diary). This talisman can be charged with fangs they drop to teleport around Great Kourend. Players can check lizardmen kill count by talking to soldiers in the canyon.

Lizardmen commonly drop Xerician fabric, which will fill the player's inventory quickly, especially if using a cannon. Players with at least level 14 Crafting who wish to do some Crafting training alongside gaining favour are recommended to take a needle & thread to craft fabrics into Xerician robes.

Tale of the Righteous[edit | edit source]

One of the requirements for the Tale of the Righteous quest is having 20% Shayzien favour. Besides favour, this quest requires completion of Client of Kourend, level 16 Strength, and 10 Mining.

Completion of the quest will grant a Shayzien favour certificate worth 10% favour. 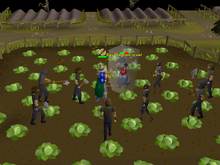 Once players have 40% favour, players can help Captain Ginea east of the War Tent in tackling organised crime, where players gain information on where gang meetings are taking place, and taking out the gangsters.

Every 30 minutes, a notice appears on the wall in Captain Ginea's tent. The notice gives the location of an organised crime meeting. After reading the notice, players are prompted to take a note to remind players of the location (this is not needed in order to gain favour). The meeting lasts for five minutes.

Once the player obtains 60% Shayzien favour, the player can challenge soldiers wandering around the Combat Ring in battle. The only rules when fighting them are that Magic and Ranged combat cannot be used during the battle.

The player must start from the tier-1 soldier and can rise up to challenge tier-5 soldiers in battle. Upon defeat, the soldiers will drop one part of their armour as a reward for the player. To challenge the higher ranked soldiers, players must have a full set of armour that is of their tier, or at minimum one rank lower than theirs. Without it, the talked-to soldier will redirect them to the lower ranked soldiers. 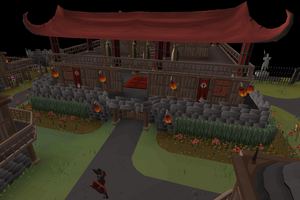 The Shayzien Administration is a government building in which the city is run from, though it also contains living quarters for soldiers. Commissioner Anwar, who is in charge of the Shayzien Constabulary, assists Lord Shiro Shayzien with the day to days of the city while he and focuses on the ongoing war with the lizardmen in the Shayzien Encampment.

The Graveyard of Heroes, where fallen soldiers of the Shayzien Army are commemorated in the form of ceremonial pillars, comprise nearly half of the city's space. The local church can be found here with an altar.

The entrance to the Shayzien Crypts can be found here.

The Shayzien Crypts is the ancient burial site for Shayzien's heroes and Kourend royalty, found in the Graveyard of Heroes. The founder of the Shayzien House, Camorra Shayzien, is buried here. The crypts been overrun by powerful undead for the past several hundred years, with efforts to clear them out unsuccessful, so trips into the crypts are seldom carried out.

The Shayzien Prison is an underground prison for Kourend's criminals, found just outside of the city walls. It is visited during the quest A Kingdom Divided.

An old, abandoned tower found just south-east of the city, it is not often visited due to its association with Xeric. Xeric's talisman can teleport players here. 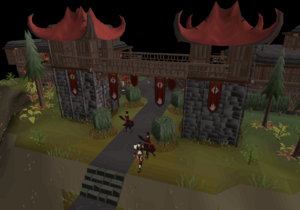 The north-western entrance to Shayzien.

Players visit the homes of various NPCs as part of a quest:

Throughout the Shayzien area, there are four out-of-place mysterious tiles found in less-travelled areas of Shayzien.

These are in fact four parts of a QR code that must be assembled together through image editing software, merging the dark parts together and colouring the tiles white. If assembled correctly, the resulting image can be scanned using a code scanner app on a phone or website. 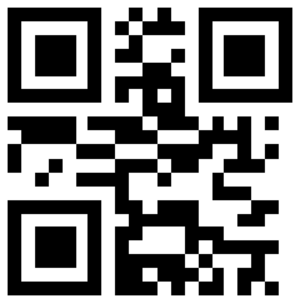 Scanning the code will result in the output "@OldpackAvailers", which is a Twitter handle with the name "Archibald Paldock", the name of the Odd Old Man. These tiles were originally added into the game files with Fossil Island in 2017, but were never visible outside of datamining software; the Odd Old Man plays a role in Bone Voyage, which is required to reach Fossil Island. In addition, "OldpackAvailers" is an anagram for "Paldock Silvarea" (Silvarea is a winding mountain pass north-east of Varrock.)

The tweet in actuality is disguised as Morse code, which is known to be featured in a number of easter eggs implemented by Mod West. To convert it, the zeros are to be substituted with periods, and ones substituted with dashes, as seen below.

Converting the Morse code text will result in the output http://bit.ly/paldock, a shortened link from Bitly, a URL shortening service. When the link is accessed, it redirects players to a YouTube video of Rick Astley's hit song, Never Gonna Give You Up. Such an act is known as Rickrolling, a famous Internet prank.