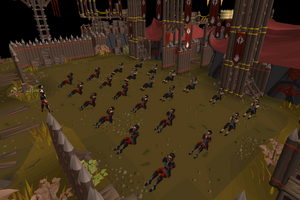 Despite the size of the Shayzien Army and their importance to the defence of Great Kourend, there are two areas in particular in which they are lacking: defence against magical arts and a naval force.[3][4] The naval force is meant to be lead by the Piscarilius House, but the current head, Lady Shauna Piscarilius, has no interest in forming the Kourend Navy.[5] Despite this, there is pushback from the rest of the kingdom for the army to form a Shayzien Navy due to concerns over Shayzien having too much military power.[6]

The Shayzien Army was not always the large military force that is now. During the reign of King Hosidius V, a report was written by Lord Rickard Shayzien that outlined the strength of the Shayzien Army. The army contained only 104 personnel, 12 of which were officers and 4 of which were medical staff.[7]

Lord Rickard Shayzien identified three main areas that needed improvement: the size of the army,[8] officer training,[9] and the army's ability to defend against magical attacks.[10]

In order to accomplish these goals, Lord Rickard Shayzien recommended an overhaul of the Shayzien Army's structure. He suggested that the army create three regiments: The Elder Warriors, Twisted Archers, and Kodai Mages.[11] Each regiment would consist of 200 soldiers and be lead by a general who reported to Lord Rickard Shayzien directly.[12]

Whether or not any of these recommendations were taken up is unknown. Since the writing of this report, the size of the army has greatly increased. However, none of the three recommended regiments currently exist,[13] and the Shayzien Army has no magical capabilities.[3] Despite this, there is some evidence that these regiments were created at one point in the past. A sergeant in the 38th decade, Yan Mattin, was court-martialed for refusing to capture civilians and bring them to Xeric.[14] He was sentenced to be executed by a twisted archer,[15] which is perhaps a reference to the aforementioned Twisted Archers regiment. 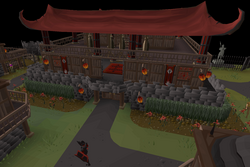 The Shayzien Administration, where Shayzien is run from. The recruitment office is also found here.

Those who wish to enlist in the Shayzien Army typically make their way to the recruitment office in the Shayzien Administration, though enlistees must be a resident of Great Kourend.[17] In the past, only Shayzien citizens could enlist in the army, but this was expanded to all citizens of Great Kourend during the reign of King Byrne I.[18] Despite this, prospective enlistees from other cities are more likely to join their local city force.[19]

The Shayzien Army consists of six regiments: The Intelligence Corps, the Medical Corps, the Engineering Corps, the Logistics Corps, the Rangers, and the Infantry.[13] Though not a regiment of the army itself, the Shayzien Constabulary, who mainly deal with internal threats to the kingdom, is considered a part of Shayzien Army.[20]

Each regiment is led by a general who reports to Lord Shayzien, while the Constabulary is led by a commissioner.[21] 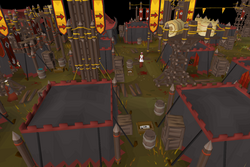 The nurses of the Medical Corps take care of wounded soldiers in the Shayzien Encampment.

The current known leaders of the seven major divisions are:

Despite their appearance, the Kourend Royal Guard are a separate entity from the Shayzien Army; instead, they directly serve the ruler of Great Kourend,[23] and are currently lead by Commander Lydia Fullore, who ensures that they are well trained and supplied.[24]

All Shayzien Army soldiers wear a special type of armour known as Shayzien armour. There are five different tiers of Shayzien armour, with each tier offering greater protection against the green acidic attacks of lizardman shamans.

The tier of armour a given soldier wears reflects their skill and rank in the Shayzien Army: 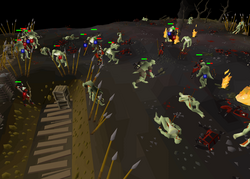 The Shayzien Infantry battle the lizardmen in the Battlefront.

One of the main aims of the Shayzien Army is the containment of lizardmen in the Lizardman Canyon, as well as guarding the western border of the Kingdom. As a result, a large number of troops are deployed in Shayziens' Wall and the Kebos Battlefront to defend the Kingdom against the lizardmen.[31]

The army has seen success in their efforts to contain the lizardmen, having made many areas of the Kebos Lowlands that were threatened by the lizardmen safe for civilians again.[32] For example, the fertile land south of Mount Karuulm was cleared out to build the Farming Guild.[33][34]

A current concern of the Shayzien Army is the ability of the lizardmen to cut off the army's connection to Lovakengj. Should a blockade occur, the Shayzien supply lines would be severely impacted. As leader of the Logistics Corps, General Babacus has been tasked with creating contingency plans should the army's supply lines be cut.[35] The connection between Lovakengj and Shayzien is especially important because the Shayzien Army sources most of its from Shayzien. [36]

The Shayzien Army also operates the Shayzien Prison, which is located to the west of Shayzien city. In addition to local criminals, the Shayzien prison is also tasked with holding the arrested members of the Kourend Council after the events of A Kingdom Divided.