The Shayzien Crypts are an ancient dungeon located in the south-western part of the Graveyard of Heroes, in Shayzien. Players must bring a light source with them or risk getting swarmed over with tiny insects. The crypts are visited during Dragon Slayer II.

The entrance to the Shayzien Crypts.

The crypts were constructed long before the founding of Great Kourend 1,510 years ago, and is the burial grounds for the kings and queens of Great Kourend, until a few hundred years ago when unusually strong zombies and skeletons began to overrun the crypts; despite efforts by the Shayzien House to eradicate the undead, they kept returning, making the entire area dangerous to traverse, though the undead do not appear to have any interest in escaping to the surface. Throughout the crypts, the symbol of Xeric can be seen, despite the crypts predating his reign.

In the lowest level of the crypts, the tomb of Camorra Shayzien, the founder of Shayzien, can be found. In addition, a tomb can be found north of hers, which appears to have been opened with blood spilled around it, and has collapsed into the floor below. It should be noted that the bloody tomb has the symbol of Xeric engraved on it. 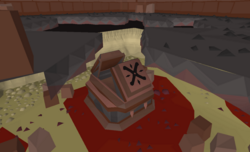 The bloody tomb found underneath the lowest level of the Shayzien Crypts.
Retrieved from ‘https://oldschool.runescape.wiki/w/Shayzien_Crypts?oldid=13933530’
Categories:
Hidden category: