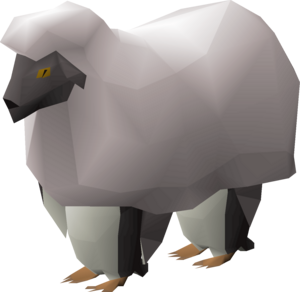 This sheep, that is actually two penguins dressed as a sheep, appears roaming inside Fred the Farmer's Farm, located in Lumbridge. They are codenamed Paxton and Philbert. Attempting to shear the "sheep" will result in it walking away. It is referred to as "The Thing" by Fred.

During the Cold War quest, it is revealed that these two penguins are actually spies of the Killer Gentoo Penguins.

It is also the only sheep outside of Zanaris with the "Talk-to" option, but it will simply give a dismissive response unless you are doing the Cold War quest.

Strangely enough, this "sheep" was part of RuneScape a long time before the Cold War quest was introduced.