Sheep Herder is a medium quest associated with the Elf quest series. It begins with the revelation that some sheep have been infected with plague. The target of the quest is to herd the sick sheep, kill them and dispose of their remains to prevent the plague from spreading to the town. Herding the sheep can prove challenging, since they are not very cooperative.

A threat to public health and safety[edit | edit source]

Speak to Councillor Halgrive located in East Ardougne in the graveyard directly south of the church.

He is concerned about plagued sheep located near East Ardougne that escaped from a local farm, causing a threat to the health and safety for the public. He is looking for someone to herd the sheep, kill them quickly and cleanly, and dispose the remains in a special incinerator set up by Farmer Brumty.

Agree to help do the job. He will happily thank you and mention you need a plague suit while herding the sheep. He will tell you to pick up the plague suit from Doctor Orbon and hand you some poisoned sheep feed.

Head inside the church and talk to Doctor Orbon. After explaining you need protective clothing to dispose the escaped infected sheep, he will sell his last suit for 100 coins so he can afford a replacement for himself. Agree to pay for the suit, and you should receive a plague jacket and plague trousers. Pray with missing Prayer points at the altar to complete an easy task in the Ardougne diary.

Head to the fenced in enclosure located north-west of the north bank in East Ardougne. With your plague suit equipped, enter the gate on the west side of the enclosure. Head towards the incinerator where you will find a cattleprod lying on the ground a few steps south of the incinerator. Pick it up.

Leave the fenced in enclosure using the west gate. You can begin to dispose of the sheep by equipping the cattleprod and using it to direct the sheep into the fenced in enclosure using the west gate. The sheep will be prodded in the direction of which you are facing. The sheep can return back to their initial locations if you wait too long to prod. You only need one of each colour (in any order), and you can finish one sheep at a time.

Note: If a sheep goes BAAAAA! (uppercase letters), it will be prodded in the direction you direct them towards. If a sheep goes Baa, it will return to its initial location. When directing them to the fenced in pen with the incinerator located, it is better to spam click the sheep so that it does not walk back. The sheep can get stuck if you prod them into a corner or against a wall where you cannot prod them another direction. Wait until the sheep goes Baa and moves towards its initial location.

All four sheep in the pen.

Once you have directed them to the gate of the incinerator, the sheep will automatically go inside the gate. Use the poisoned sheep food to kill each sheep. Collect their bones and use them on the incinerator to burn the remains.

Return to Councillor Halgrive and tell him you disposed of the four sheep. He will reimburse you the 100 coins you spent for the protective clothing in addition to 3,000 coins as recognition of your service. 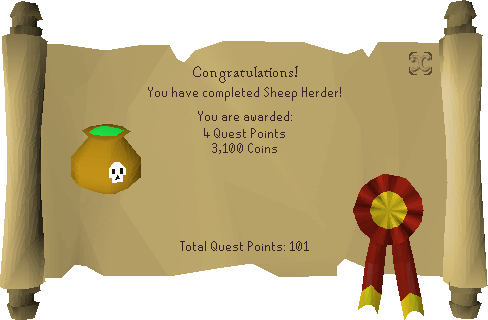 Sheep Herder is directly required for the following quests/miniquests: