Fred the Farmer's sheep are getting mighty woolly. He will pay you to shear them.

Speak to Fred the Farmer about a quest at his sheep farm north of Lumbridge. He will give you one to bring him 20 balls of wool. The fastest way to complete the quest is to buy 20 balls of wool from a general store, such as Aemad's Adventuring Supplies. or the Grand Exchange and then to give them to Fred.

If you do not have shears, Fred will give you some. Enter the fenced area containing sheep to the east connected to his house. 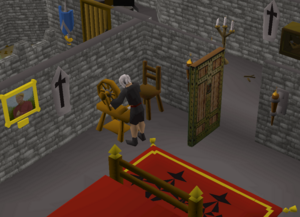 The spinning wheel on the 1st floor[UK]2nd floor[US] of Lumbridge Castle.

Shear the sheep with shears or use the shears on them. Sheep with wool look puffy and sheep without wool will look skinny, they will grow back their wool after a minute. Sometimes, they will run away from you if you try to shear them; keep trying and eventually you will shear them.

Once you have 20 pieces of wool, you must now spin them into balls of wool. Go to the 1st floor[UK]2nd floor[US] of the Lumbridge Castle. Click on the spinning wheel in the room with the large carpet to spin your wool. When they are all balls of wool, go back to Fred the Farmer to finish the quest. If you do not have the space to carry all 20 pieces of wool, you can make smaller deliveries until you reach the required total.

Players planning to do more free-to-play quests right after this one are advised to shear and spin at least three more balls of wool, for use in Prince Ali Rescue. 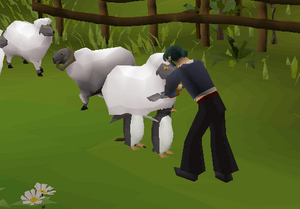 The two penguins disguised as a sheep.

There are two diversions in this quest: 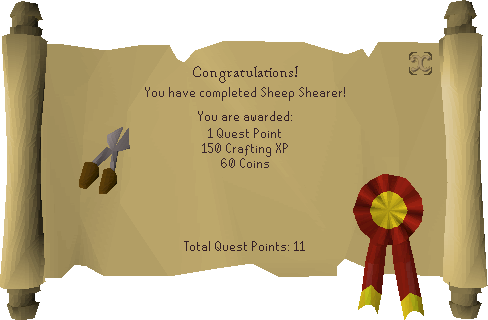