Shilo Village is a quest in which the player lays to rest a vengeful spirit that is attacking Shilo Village, a town located in southern Karamja. The quest unlocks access to the village and its cart system.

Map of the Quest

Start by talking to Mosol Rei at the entrance to Shilo Village.

Warning: If you ask, "What danger is there around here?", you will be attacked by a couple of undead ones.

A quick way of getting there is using the gnome glider to Karamja (aka Gandius) then crossing the stepping stones towards the south-west (30 Agility required, but you can still cross by falling off; you'll automatically swim to the other side). If you have access to the fairy ring network, you may travel to south of Tai Bwo Wannai Village (CKR) and run south across the bridge, then east on the path behind Shilo Village.

All items except good food, armour, teleports, and the bones can be purchased at Jiminua's Jungle Store en route to visiting Trufitus. The bones can be obtained from the Chicken (Level 1) south of Trufitus past the rotten fence. Respawn time Aprox. 10sec.

Mosol Rei should give you a wampum belt to take to Trufitus (start of Jungle Potion) who is in the house north-east of Tai Bwo Wannai. Use the wampum belt on Trufitus, and he will tell you that things look very bleak (

Ask him about a legend and the temple, and tell him to tell you more. He will have almost no hope of anyone finding the temple of Ah Za Rhoon. You must state that you will look for the temple, and once you affirm your intent to search, Trufitus will take the wampum belt from you, and this quest will turn yellow in your Quest Journal.

Items recommended: Decent armour and/or Prayer potions to defend against the undead ones, food.

To get to the temple of Ah Za Rhoon from Tai Bwo Wannai, go east to the river, cross the log near the crashed glider, and go south along the river until you reach a mound of earth surrounded by rocks. If you have completed The Grand Tree, a quicker way to get there is to teleport to the Emir's Arena using a ring of dueling and take the glider to Gandius.

Note: If you wait too long before climbing down, the dirt mound will respawn and cover the entry. You don't need another torch and rope to open it back up, just right click and search it twice to resume the quest.

In the cave are undead ones (level 61 - 73) who may attack you. Killing them occasionally causes a cloud of poison gas to appear and deal damage to you.

In this cave system, you will need to find four items. Consult the following map to aid in finding them. 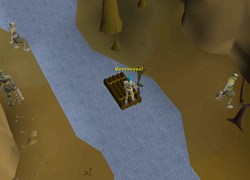 Taking the boat out of Ah Za Rhoon.

After acquiring all four items, you can teleport out. Otherwise, to exit the dungeon, return to the smashed table (3 on the map). You can craft the smashed table into a raft and use it to leave. This does not always work; it is possible to get the message that there isn't enough wood left. In this case, you will have to leave by other means. If you want, you can continue south, then east to the end of the cave. Search the rocks you find there to leave via the waterfall. You will take a lot of damage if you fall while leaving this way. You will find yourself near the stepping stones to the east of Shilo Village. 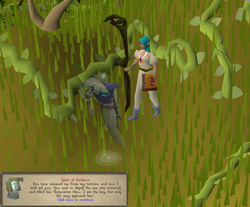 Read both the scrolls and the plaque. Next, use both scrolls, the plaque, and the corpse on Trufitus. He will tell you about the tomb of Bervirius and instruct you to bury the corpse.

Go to the Tribal Statue west of Trufitus' hut, and bury the Zadimus corpse. The Spirit of Zadimus will appear. He will give you a bone shard. Take the bone shard back to Trufitus, and he'll tell you to look for Bervirius' tomb.

Note: Be sure to read the scrolls and the plaque, or Trufitus won't tell you about Bervirius' tomb! Also, don't worry about the quest guide not updating too much. Once you've got all the items, you should be fine to go to Bervirius' tomb. 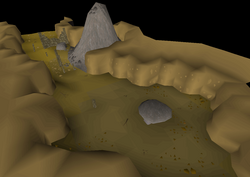 Climb the rocks and cross the bridge to reach Cairn Isle. At lower Agility levels, you have a higher chance of falling and taking damage, so it may be wise to bring some food.

Once you're across the bridge, search the well-stacked rocks (i.e. the cairn) on the north side of the island. Enter the crawl-way (32 Agility needed) to enter the Tomb of Bervirius. You may become stuck many times, but keep trying.

Head south to the dolmen, and search it to get a sword pommel, a locating crystal, and Bervirius notes (if you lose these items, you will need charcoal and papyrus to get the Bervirius notes again).

Read the scrolls. You need to make a new necklace. Use a chisel on the sword pommel to make bone beads. Use the bronze wire on the beads to make the beads of the dead necklace.

Exit the cave by climbing the rock slide north of the dolmen, or teleport out. 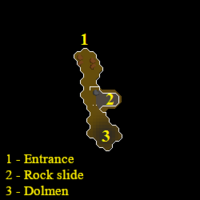 Map of the Tomb

Note: If you drop the sword pommel or the bone beads, they will turn to dust and you will have to go back and get new ones. IF you drop the locating crystal, you will take 10 damage.

Tip: If you have access to the fairy ring network, you can use the karambwan fishing spot fairy ring (DKP) to travel just north of the Tomb of Rashiliyia entrance.

From the fairy ring (DKP): Head south until you're about halfway between the coast and crashed glider.

Rashiliyia's Tomb is north of the crashed gnome glider. Look for a searchable palm tree. It should be noted that the entrance is hidden behind a hill and is most visible if you are facing south. 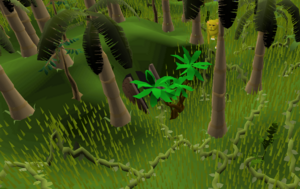 The hidden doors to the Tomb of Rashiliyia.

Search the palm trees to find two doors. Search these doors to find the shape of the keyhole, and then use your chisel on the bone shard to make a bone key. Put on the beads of the dead necklace, and then use the key on the door to enter.

Note: You might run into The Shaikahan (level 83), which cannot be damaged with regular weapons.

Note: If you are low level, bring a friend and let them tank the zombies. If nobody can help you, then suicide-run to the door until you manage to use all 3 bones on it. Once you've done that, you can open the door and the creatures won't be able to attack you.

Note: If you attempt to leave the entrance area by clicking on the tomb door the player will say a few lines of dialogue, causing any damage done to the player to stack once the dialogue ends. This can kill low level players as the summoned undead ones can hit up to 7 damage.

Once inside, run past the undead ones and through the ancient gates, then head down the rock slope. Go west until you find a stack of coins (do not pick them up), then south, and then south-west at the first fork. At the end of this corridor will be a set of doors. Other sets of dummy doors exist if you take a wrong turn, so make sure you're in the right place. Right-click the bones to use them on the door. While still wearing the necklace, enter the room. If for any reason you leave this room, you will not need bones to enter the room again.

Note: If you try to pick up the coins, the coins will turn to dust and more undead ones will be summoned. 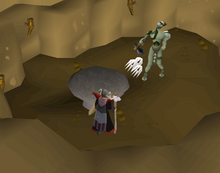 Lure Nazastarool to the northern part of the dolmen to safespot him.

While still wearing the beads of the dead, search the dolmen in the room. You will be attacked by Nazastarool, a level 91 zombie. He uses Melee throughout the battle. After you defeat him, he will turn into a level 68 skeleton. After you defeat him, he'll turn into a level 93 ghost. You can safespot all three forms from any side of the dolmen. You can kill each form separately, leave to restock, and then return to kill the next form.

Once you have defeated the ghost, you will get the corpse of Rashiliyia.

Tip: Between forms, a dialogue comes in the conversation window. In extremis, perform some other action, like burying the spare bones you brought, or inspecting your quest log, and the next incarnation will not immediately appear, giving you time to heal, leave, etc.
Note: A friend can help you slay the boss. You only need to be the last player to attack it (this counts 0s but not poison/venom), you do not need to deal any damage yourself. It is also possible to defeat the boss with a cannon.

To leave, simply return to where you entered. Use your key on the door to exit. It is recommended for lower level players to instead teleport out.

Go back to the tomb of Bervirius on Cairn Isle west from Shilo Village, and use Rashiliyia's remains on the dolmen. Rashiliyia will appear before you. She will thank you for letting her rest in peace and give you your reward. 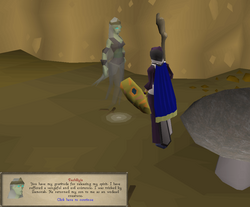 Rashiliyia is finally laid to rest. 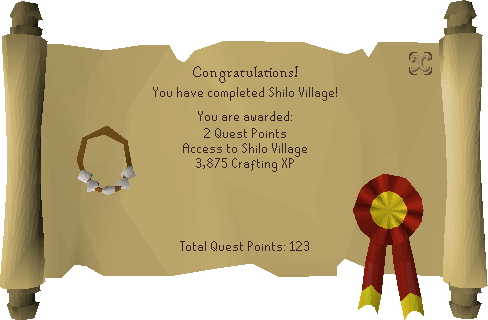 Completion of Shilo Village is required for the following quests:

Completion of Shilo Village is required for the following Achievement Diaries:

Oh no, I'm going to be stuck in here forever!
How will I ever get out!
I'm too young to die!