Shilo Village is a village on Karamja. It is only accessible to players that have completed the Shilo Village Quest.

There are several excellent areas to train skills in Shilo Village:

In northern Shilo Village there are 7 gem rocks. If a player mines these rocks, they shall get a gem instead of an ore. Players mining gems here may obtain precious (sapphire, emerald, ruby, and diamond) or semiprecious (opal, jade, and red topaz) gems. Because a charged amulet of glory increases the chance of obtaining gems while mining, wearing a charged amulet of glory sharply increases the speed of mining gem rocks. Players earn 65 Mining experience per rock mined.

An additional underground section of the gem mine, containing 48 more rocks and a bank deposit box, is unlocked if the player has completed the hard Karamja Diary.

This area is popular among many players because here they can train both Mining and Crafting (by cutting gems) at the same time.

The Shilo Village furnace is directly across from the bank, which makes it a popular furnace for players smelting large quantities of ores into bars. This furnace is the closest furnace to a bank in the game, however a disadvantage is that Yohnus requires 20 coins for each use, but players can put coins into a coffer to keep a full inventory of ore. The next closest furnace is Prifddinas, 1 tile farther away, requires Song of the Elves completion, but needs no extra payment. After completing the Karamja Elite Diary, Yohnus will no longer charge the player to use the furnace.

There are four fishing spots in Shilo Village. At these fishing spots, fly fishing rods and feathers can be used to lure trout and salmon, or fishing rods and fishing bait can be used to catch pike. Power fly fishing in Shilo Village is considered to be one of the faster ways to train Fishing. This method involves buying large amounts of feathers on the Grand Exchange or from the eastern fishing store and then catching trout and salmon from the centre river. This fish can either be dropped or stored in the southern bank, or the gem mine deposit chest. The raw fish can then be sold for a small profit on the Grand Exchange.

There is an agility shortcut across the village river that requires completion of the medium Karamja Diary and level 77 agility. This shortcut lowers the time needed to reach fishing spots on the other side of the river if they move.

The undead ones over the gate can be attacked with Ranged or Magic safely, making it good for experience. Halberds can also be used to safely train melee. 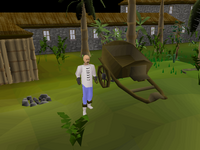 The cart system provides a quick transport between Shilo Village and Brimhaven for 200 coins once they have finished Shilo Village.

Lady of the Waves[edit | edit source]

Talk to the fishing shop owner, Seravel, upstairs from the Shilo Village fishing shop to buy a one-way ticket on the Lady of the Waves for 25 coins. The player can go to either Port Khazard or Port Sarim by presenting the ticket to the boat west of Shilo Village.

The fairy ring CKR, south of Tai Bwo Wannai, can be used to reach Shilo Village, but players will have to walk around the village wall and enter by the east gate.

There are two shops in Shilo Village, the general store, and the fishing shop.

The Shilo Village General Store sells everything that a normal general store sells, and more. The most notable things are the charcoal and papyrus, used in the Legends' Quest. Crushed gems can be sold here for 1 coin each.

The Shilo Village fishing shop, Fernahei's Fishing Hut, sells all normal fishing supplies. When fly fishing, the shop can be used to top up on feathers.

Players whose combat level is at or over 100 and who have a Slayer level of at least 50 can get Slayer tasks from the highest level Slayer Master, Duradel. He is upstairs in the easternmost house that has the Slayer Master icon on it on the minimap. From the fishing shop go up the ladder and cross the bridge to get to Duradel. Completion of the Elite Karamja Diary will unlock the Karamja gloves 4 which give unlimited teleports to Duradel.