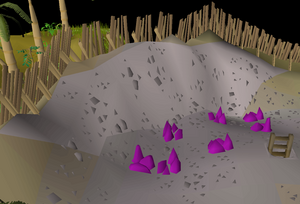 The Shilo Village mining site is one of only two places in Gielinor where players can find gem rocks, the other place being the mine on Lunar Isle. It is located in the north-west corner of Shilo Village. It contains seven gem rocks, which give one random gem when mined, either an opal, jade, red topaz, sapphire, emerald, ruby, or diamond. There are no monsters or any other rocks at the mine.

Players who have completed the Hard Karamja Diary may wear the Karamja gloves 3 to gain access to the underground portion of the gem mine, which contains an additional 48 gem rocks and a bank deposit box. Players may also use the gloves to teleport directly to the underground mines an unlimited number of times.

Players may choose to save their gems and later use them to make jewellery, or they may bring a chisel and cut the gems into bolt tips for extra Crafting and Fletching experience while banking only when they have an inventory full of the more valuable gems. If a player has obtained the gem bag from the Motherlode Mine they can use it to save inventory space by storing standard uncut gems. This can be combined with fletching uncut opal and uncut jade into bolt tips, leaving the remaining 24 inventory spaces to be filled with uncut red topaz, maximizing profit in the above ground mine.

Experience rates at level 70 are about 57k+ an hour at this mine with a charged amulet of glory equipped.

The underground area of the mine.