Shooting Stars are a Distraction and Diversion in which a meteor falls from the sky approximately every two hours across every in-game server. These appear as Crashed Stars that can be mined for stardust, which can be exchanged at a shop run by Dusuri at the Mining Guild entrance in Falador.

On every world, a shooting star will fall at a random spot selected from a predetermined list roughly every two hours (with a variation of up to 15 minutes), although stars on different worlds may fall closer in time to one another, or even at the same time.

Although the activity is available in free-to-play worlds, players only get awarded half the experience points. On top of that, Dusuri's Star Shop, where players can exchange rewards for stardust, is members only. 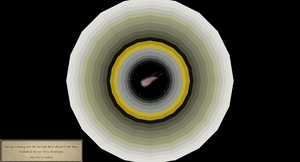 A shooting star viewed through a telescope.

Members can use a telescope in a study room in a player-owned house to find the approximate area and time of the next landing. It is also possible to use telescopes in another player's house for this purpose.

Crashed Stars come in sizes from 1 to 9. Players can find out how large the star is by prospecting it. Additionally, prospecting it will reveal the progress to the next level. (See Star sizes below for experience for each star size.)

The first person to attempt to mine the crashed star will be notified in the chatbox that they are the first to find the star, and a jingle will play alongside the chatbox message. In addition, their name will be added to the Shooting Star Noticeboard in the reception room north of the Observatory; up to five players are displayed on the noticeboard.

Each layer of the star is mined from 0% to 100%, at which point the outermost layer sloughs off, and the star's size is reduced by one tier. The amount left to mine of the current layer can be determined by prospecting while mining. The more people mining a star, the faster one can expect to get through the layers.

Players will receive stardust as they mine the crashed star, receiving experience each time a piece of stardust is mined. There is a chance players may receive additional stardust depending on the star size. Mining enhancers that multiply yield do not work on crashed stars. In addition, players may receive a rock golem as well whilst mining, where the chance is scaled off the size of the star. If mining at the Trahaearn mine entrance, there is also a 1/127 chance of obtaining a crystal shard.

A star can only deplete at a maximum rate of 3 stardust per game tick. For example, if 8 players successfully mine the same star on the same tick, they will all still receive loot as normal, but the star's remaining "health" bar will only decrease by 3 points. This means, for example, that the final layer of a star will always last at least 4 minutes, regardless of the amount of players mining it at once.

Once the final layer (when the star is size one) is fully mined, the star will crumble and disappear,. Players can exchange stardust via a shop run by Dusuri at the Mining Guild entrance on the surface.

Stardust is obtained by mining the crashed star. Stardust is used as currency at Dusuri's Star Shop to purchase the celestial ring along with other rewards.

The only way to locate the actual crash site is to search each possible crash site in the given area until the crashed star is found; this process, as well as the mining process, can be greatly expedited with the assistance of other players.

Feldip Hills and the Isle of Souls[edit | edit source]

As a piece of content brought into Old School RuneScape via backporting, Shooting Stars were originally released on 2 September 2008 in RuneScape as one of three Distractions and Diversions, alongside Balthazar Beauregard's Big Top Bonanza and Penguin Hide and Seek.