From Old School RuneScape Wiki
Jump to: navigation, search
The RuneScape Wiki also has an article on: rsw:Sigmund
This article is about the advisor to Duke Horacio in Lumbridge. For the Fremennik merchant, see Sigmund the Merchant.
Loading...
AdvisorDeath to the DorgeshuunAnother Slice of H.A.M.

During this quest, the player is sent to recover silverware allegedly stolen by underground goblins. During this quest, it is discovered that Sigmund has taken the silverware and is a member of Humans Against Monsters. His attempts at creating a war between Misthalin and the Dorgeshuun were thwarted, and he was dismissed for treason by Duke Horacio.

Death to the Dorgeshuun[edit | edit source] 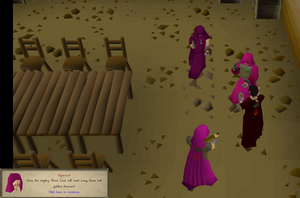 During the Death to the Dorgeshuun quest, it is revealed by a H.A.M member that Sigmund and Johanhus Ulsbrecht, head of H.A.M, are 'planning something big'. After eavesdropping on the H.A.M council, it is discovered that they are using a machine they bought from the dwarves of Keldagrim for unknown purposes. Once the dead Dorgeshuun Zanik has been revived, she reveals that the H.A.M are going to use the machine to flood the Dorgeshuun capital, Dorgesh-Kaan. After infiltrating the caves with the machine in it and slaying the H.A.M helpers, the player and Zanik battle the level 50 Sigmund. Using a ring of life, he escapes death and swears that they will meet again. The ring works even if you reduce his Hitpoints to 0.

During this battle, the player discovers Sigmund is a Saradominist; he uses a protection prayer called up by the powers of Saradomin.

Sigmund is rather simple to defeat. First, players must defeat his cronies. Afterwards, both the player and Zanik can focus on Sigmund alone. Sigmund, probably out of spite of Zanik, will use Protect from Missiles rather than the protection prayer against whatever combat style you use, thus making him vulnerable. 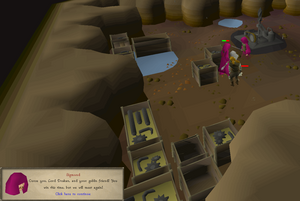 Sigmund's ring of life teleports him to safety.

Another Slice of H.A.M.[edit | edit source]

In this quest, Sigmund and his men ambush goblins at the Goblin Village. After a brief struggle, he captures Zanik and ties her to the new rail line linking Keldagrim and Dorgesh-Kaan in the hopes of starting war between the two cities. However, his plans are foiled by an adventurer who defeats him and manages to get Zanik off the track just before the train arrives.

This time, Sigmund is slightly harder to defeat. Zanik will not be able to help you, and his combat level has increased from level 50 to level 64 since the last encounter. He will activate protection prayers depending on which combat style the player attacks with. He is immune to the effects of ring of recoil.