The signed oak bow is obtained during the Ghosts Ahoy quest. It is identical to an oak longbow but has been signed by Robin in Port Phasmatys after the player beats him in several games of Rune-Draw. Ak-Haranu has the translation manual which the player requires, and requests the signed oak bow in exchange for it.

It is possible to obtain multiple signed oak bows through use of the drop trick, however, players are no longer able to request a signed oak bow from Robin after returning the bow to Ak-Haranu. 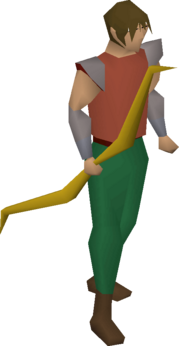