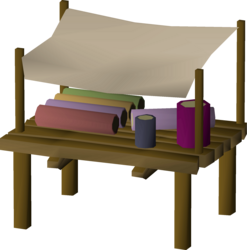 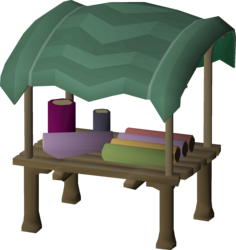 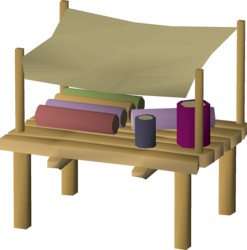 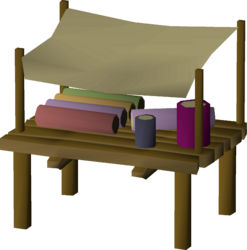 A silk stall is a stall that players can steal silk from at level 20 Thieving. Players earn 24 Thieving experience every time they steal some silk (around 16,500 experience per hour), and it restocks every 5.4 seconds (9 ticks). Players may sell silk to the Silk merchant for 60 coins after they barter with him, provided they have not recently stolen from the stall (in the last 20–30 minutes). Players risk the possibility of being spotted by a guard or Knight of Ardougne while thieving. Players may choose to fight them, trap them inside a nearby building, or find a spot where they are unable to be attacked to resume thieving.

Choose the north-eastern silk stall. Stand between the stall and the building, as if you were the stall holder. Kill the guard that patrols behind the silk stall and the silver stall. Start stealing silk. Watch out for the knights of Ardougne and the other guards. Don't mind the hero in blue or the paladin. They can be standing right next to you when you're stealing, but don't do anything unless your combat level is near theirs. Every time the guard behind you reappears, kill him and continue stealing.

Another method to use is trap the closest guard and the closest knight in the house north and north-east of the north stall and then steal from the north stall. To trap the guard and knight, just attack them, and go into the house so that they follow you into it. Once you both are in the house, walk to the first space outside the door and then shut it, and the guard is stuck inside. If you are trying to trap both the knight and guard in the same house, note that the guard may get out while the knight is being trapped, or vice versa, so to make sure they don't, once you are both in the building, shut the doors fast and don't open them until the other guard is away from the door. For higher-level players (60+ Combat), you may want to attack them and turn Auto Retaliate off so you don't kill them while trying to trap them because if they die, they respawn outside the building. When you reach level 38 Thieving, there is a master farmer outside the north entrance to Ardougne that you can pickpocket.